Daniel “Rudy” Ruettiger overcame poverty, dyslexia, his diminutive stature, and three rejections from Notre Dame in order to finally become a legend among the Fighting Irish.

Taro Yamasaki/The LIFE Images Collection/Getty Images Rudy Ruettiger in the empty stands at Notre Dame stadium in 1993 to promote the film based on his life.

The crowd at Notre Dame went wild. On the field, a 5’6″ defensive end had just sacked the opposing quarterback — resulting in a thrilling victory for the Fighting Irish. At least, that’s how the film about Rudy Ruettiger’s unlikely college football career ends. Was it true?

Born to a large and impoverished family, Ruettiger had long aspired to play football for the University of Notre Dame. The Fighting Irish was the favorite team of his father, a miner who respected hard work.

As chronicled in Hollywood’s 1993 movie Rudy, Ruettiger struggled to overcome financial and physical hurdles in pursuit of his goal. Because of his dyslexia and small frame, acceptance into the University of Notre Dame seemed like a lofty dream.

But in real life, just as in the movie, Rudy Ruettiger never gave up. He studied hard and displayed intense dedication. In the end, this poor boy from the outskirts of Chicago became a Notre Dame legend — and a compelling inspirational speaker.

Born on Aug. 23, 1948, in Joliet, Illinois, Daniel Eugene Ruettiger grew up in a lower-middle-class family on the outskirts of Chicago.

The third of 14 children, he learned to love football from his father, a hardworking miner. His family’s weekly gatherings around the television to watch Notre Dame football not only marked a bright spot in Ruettiger’s childhood but also birthed his lifelong dream to join the team.

At Joliet Catholic High School, Ruettiger was a poor student but a promising athlete. He was a terrific cornerback during his junior and senior seasons, garnering more tackles than anyone on his team. Despite weighing a scrawny 165 pounds, his high school success made him even more determined to play for Notre Dame.

An interview with Rudy Ruettiger.

However, Ruettiger’s five-foot-six-inch frame and yet-undiagnosed dyslexia created physical and academic hurdles. After he graduated high school, his football dreams felt entirely out of reach. Instead, Ruettiger enlisted in the United States Navy in 1968. He served two tours at sea during the Vietnam War.

Returning home with his newfound G.I. Bill benefits, Ruettiger successfully enrolled at Indiana’s Holy Cross College in 1972. There, Ruettiger learned that if he got all As, he could try to transfer to Notre Dame after four semesters.

That’s what he did. Officially diagnosed with dyslexia, Ruettiger worked hard toward his goal. He studied to improve his grades and worked a groundskeeper job on the nearby Notre Dame campus. From his spare room in the basketball arena, he continuously applied to get in.

After three disheartening rejections, Rudy Ruettiger was accepted in 1974 and became an official Notre Dame man.

The Man Behind The Hollywood Film Rudy

Rudy Ruettiger’s life at Notre Dame would be well-documented in the uplifting 1993 Hollywood hit Rudy and complemented by his 2012 autobiography, Rudy: My Story.

But Ruettiger’s success was hard-won. Once he’d been accepted to Notre Dame, it took tremendous effort for Ruettiger to even get accepted onto the Notre Dame scout team, which helps the varsity team practice.

Coaches took notice. Notre Dame head coach Ara Parseghian not only encouraged walk-on players like Ruettiger but was well aware that sheer will can often triumph over lack of experience.

A clip from Rudy showing Coach Fortune, who was based on Coach Merv Johnson, teaching Rudy a lesson.

And Coach Merv Johnson proved essential in coaching Rudy Ruettiger from fledgling scout member to an official part of the team. During Ruettiger’s last few months as a student in his senior year the new head coach, Dan Devine, gave him a chance to shine.

Although Parseghian had promised Ruettiger an opportunity to play on the field, the coach stepped down after the 1974 season. His replacement, Devine had made no such promise. But he understood how much it would mean to Ruettiger.

On Nov. 8, 1975, as Notre Dame battled Georgia Tech, Devine told Ruettiger to get ready. It was the first and last time that he would step onto the field during an official game.

At first, Ruettiger failed to tackle quarterback Rudy Allen — but then rammed him to the ground during the very final play. 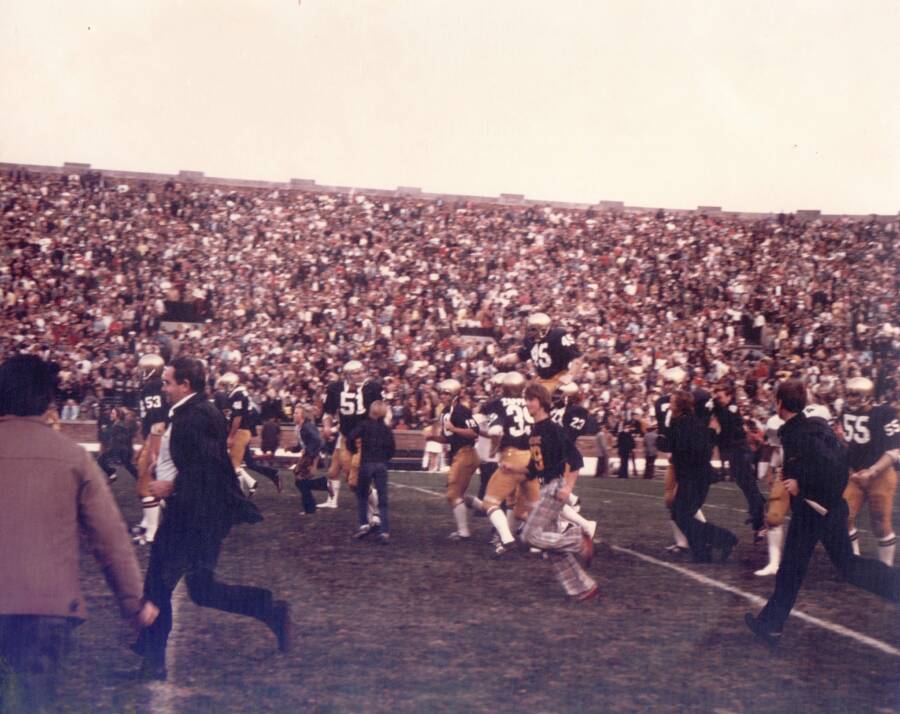 The crowds roared as Ruettiger’s teammates carried him off the field on their shoulders. Not only had Rudy Ruettiger’s dreams been realized — but he’d become a Notre Dame legend. And Hollywood took notice.

According to Ruettiger himself, the movie (in which he appears as a fan during the last scene) was 92 percent accurate.

Since leaving Notre Dame, Ruettiger has largely lived a respectable life as a motivational speaker, author, and owner of Rudy Beverage, Inc. However, Ruettiger was charged with securities fraud in 2011 for an alleged pump-and-dump scheme. He later admitted that greed led him down the path of crime, which he regretted.

Ultimately, Rudy Ruettiger remains a beloved icon of determination and triumph. He has been awarded honorary degrees from several universities, given the key to the city at numerous cities across the country, and was even recognized by President George W. Bush.

After learning about Rudy Ruettiger, read about the true story of Desmond Doss and ‘Hacksaw Ridge.’ Then, learn about Tami Oldham Ascraft and the truth behind ‘Adrift.’