In spite of Jasper Maskelyne’s hair-raising tales of magical ingenuity and vanishing acts on the North African front, many of his adventures were later revealed to be nothing but smoke and mirrors.

After the end of World War II, the triumphant Allied countries enjoyed nothing more than a good war story — and the more daring and clever, the better. So when Jasper Maskelyne stepped forward with a slew of fantastically improbable tales of using stage magic to outfox Hitler’s most ingenious generals, the world sat up and paid attention.

From 1940 to 1942, the British Army had struggled valiantly to hold out against the Germans and Italians in North Africa. They were outnumbered, outgunned, and demoralized. But Maskelyne claimed that behind the scenes was a top-secret effort to use disguise, misdirection, and illusion to give the Allies an edge.

Without this outlandish operation, the Nazis may well have smashed through the Suez Canal and marched to victory.

Who was responsible for these incredible exploits? None other than Maskelyne himself, allegedly. But while Jasper Maskelyne had more than one secret up his sleeve, it took years to understand the facts and fiction of his wartime activities.

This is the story of Jasper Maskelyne, the magician who may have been one of the most fabulous liars of World War II.

The Long And Magical Roots Of Jasper Maskelyne 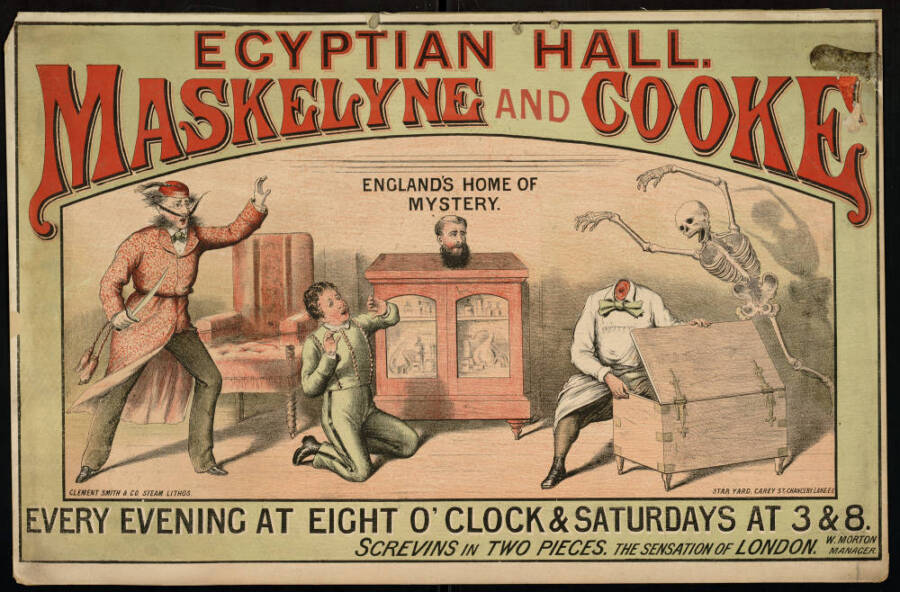 Harry Ransom Center/The University of Texas at AustinBoth Jasper Maskelyne’s grandfather and father were magicians. This poster advertises one of his grandfather’s shows.

Jasper Maskelyne was born into magic royalty. His grandfather, John Nevil Maskelyne, was a celebrated stage magician in Victorian Britain. Maskelyne’s father, Nevil, also enjoyed success on the stage — as well as a lucrative career as an inventor. He invented the first pay toilets and patented a line of typewriters.

By the time Jasper was born on Sept. 29, 1902, the Maskelyne family enjoyed a comfortable fortune built on their success in entertainment and business. Both John and Nevil Maskelyne had drawn packed audiences for decades at their own ” St. George’s Hall, England’s New Home of Mystery” in Piccadilly, London.

From an early age, it seemed that Jasper Maskelyne would follow the path of his forebears. He made his stage debut at the age of 9. From there, young Jasper grew into a dashing magician whose combination of charisma, comedy, and a singular skill for gadgets and illusion made him an international success.

But his sleight of hand on the stage was better than his business sense. By the early 1930s, he had mismanaged the family company badly enough that he was forced to sell off his assets, as well as the grand theater bought by his grandfather. 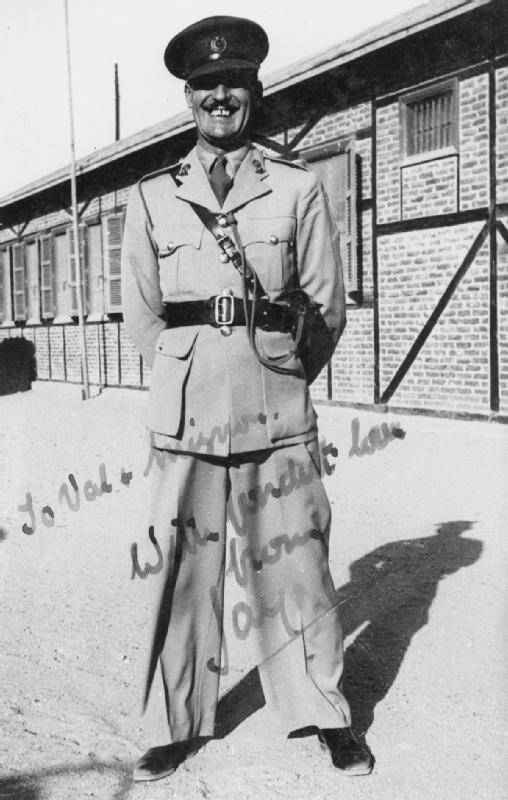 Wikimedia Commons/Imperial War MuseumMaskelyne had little patience for army training, preferring instead to work on impractical inventions such as “fire cream,” a fire-retardant paste made of asbestos.

By the end of the 1930s, Jasper Maskelyne was reduced to using his family name to sell suits. But then World War II broke out in 1939 — and Maskelyne decided that he would get involved.

It wasn’t easy. Maskelyne tried to join the British Army as an officer but was rejected. He finally managed to convince the Royal Engineers to take a chance and commission him. Maskelyne was excited. He saw his involvement in the war as a way to make a difference for Britain.

As he would later write:

“The outbreak of the 1939 war, foretelling inevitable misery to everyone, meant different things to different people. To me, it involved something very strange and rather alarming – the focusing of my whole life on the problem of how best to mobilize the world of magic against Hitler.”

Maskelyne, a master of misdirection, was then sent to train with the Camouflage Development and Training Centre in Farnham Castle, Surrey. Alongside others, he was tasked with developing new methods of disguising troops in the field.

However, Maskelyne quickly grew bored learning “how Arctic rabbits suffer a change of color when snow falls, and why tigers hang about in tall grass.”

Itching to get into action, Maskelyne was thrilled when his unit was ordered to North Africa to take part in the fight against Nazi Erwin Rommel’s vaunted Afrika Korps.

Shortly after landing in Egypt, he claimed to have formed “The Magic Gang,” a disparate group of technicians and artists with orders to disguise whole armies, confuse enemy air forces, and otherwise leverage the magician’s trade in the fight against Nazism in the desert. 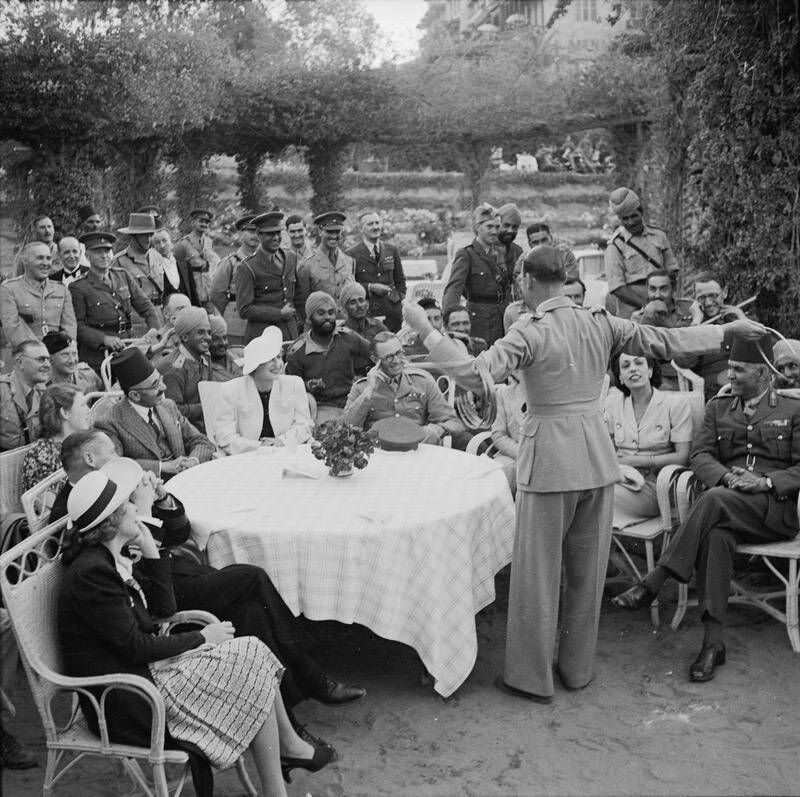 Officially, Jasper Maskelyne was employed in the Camouflage Experimental Unit. He was responsible for crafting an array of gadgets and disguises to help prisoners of war escape from enemy camps.

Among the devices which he dreamt up were combs containing saw blades for cutting through barred windows, maps concealed on the backs of playing cards and books, and cricket bats packed with tools.

But the British forces faced a significant problem. Fighting in the desert meant they had no way to conceal the movement of men, vehicles, tanks, and artillery. The flat, sandy landscape made it easy for the Luftwaffe to spot them.

They needed a way to fool the enemy in order to preserve the element of surprise.

Jasper Maskelyne, a master of misdirection and deception, had the perfect solution. Using a simple wooden frame covered in painted canvas, a truck could be covered up to appear as a tank, and artillery could be disguised as simple supply vehicles. The deception worked brilliantly, and Maskelyne’s “Sunshields” were adopted throughout North Africa.

Maskelyne was then put to work confounding the Germans. In his ghost-written memoir, Magic: Top Secret, Maskelyne writes that he disguised a small coastal town with mock buildings, dummy ships, and lights. The decoy town fooled the Luftwaffe and protected the crucial port of Alexandria.

Perhaps the most ambitious project described by Maskelyne was the installation of “Dazzle Lights” — spotlights surrounded by mirrors meant to disorient enemy pilots.

Set up along 120 miles of desert, Maskelyne explained how these lights turned the Suez Canal invisible, forcing German bombers to hammer the wrong target for nights on end — and saving Britain’s irreplaceable oil supplies from the Persian Gulf.

What Was Fact And What Was Fiction In Jasper Maskelyne’s War Stories?

Wikimedia CommonsSunshields, like the one being mounted on this Matilda II tank in 1941, could fool the enemy.

From 1940 to 1942, Jasper Maskelyne recalled, his Magic Gang produced:

“… dummy men, dummy steel helmets, dummy guns by the ten thousand, dummy tanks, dummy shell flashes by the million, dummy aircraft; and disguising the real tanks as trucks, disguising Bofors as trailers, making such a colossal hotchpotch of illusion and trickery as has never been accumulated in the world before.”

Maskelyne claimed that his most significant contribution came in September 1942, when he was called upon to use every trick in his magician’s bag to conceal the movements of the British Eighth Army in the Second Battle of El Alamein.

Sunshields mounted on trucks were used to fool Rommel — known as “The Desert Fox” — into believing that hundreds of Allied tanks were attacking from the south, while the genuine attack descended from the north. 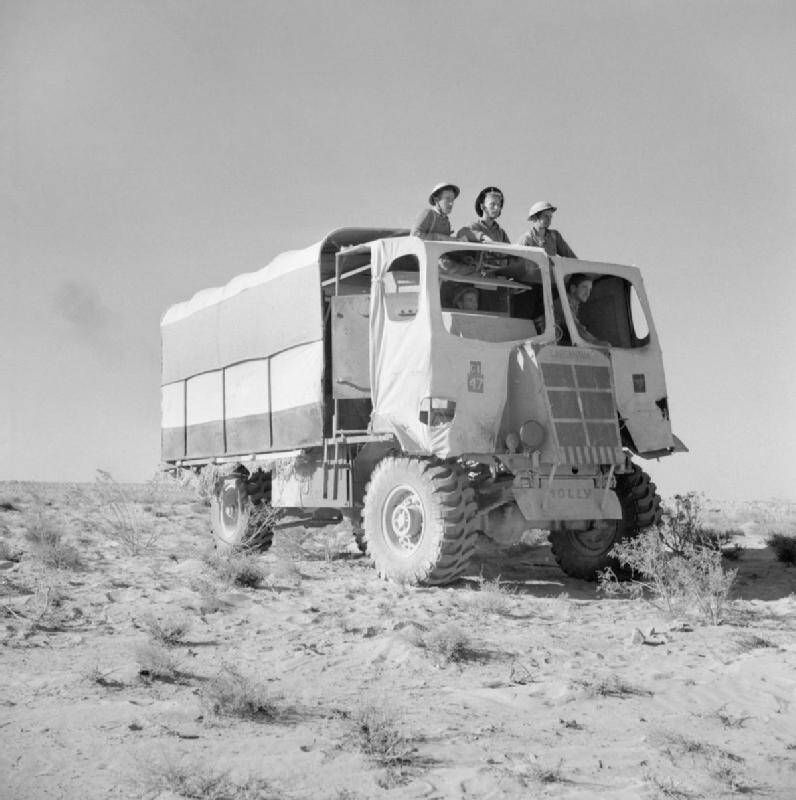 Wikimedia Commons/Imperial War MuseumDuring the Second Battle of El Alamein, hundreds of Sunshields were used to deceive Field Marshal Erwin Rommel. Although Maskelyne took credit for the achievement, he was long gone from the battlefield by the time they were used.

The deception allegedly allowed British commander Field Marshal Bernard Montgomery to win Britain’s first major victory of the war. Prime Minister Winston Churchill would later write that “Before Alamein we never had a victory. After Alamein, we never had a defeat.” And without Maskelyne’s brilliant contributions, the battle, and the war itself, may never have been won.

There was just one problem: Much of what Maskelyne described in his memoirs likely never happened.

According to official records, The Magic Gang never existed. Although Maskelyne was a member of the Camouflage Experimental Unit, his original Sunshield was a bulky failure until it was redesigned with lighter steel framing. The city of Alexandria was in fact never safe from enemy action, being attacked on numerous occasions by German planes and once by Italian frogmen.

And Maskelyne’s fantastic “Dazzle Lights”? Only one was ever built, and it never progressed beyond the experimental stage.

And although Maskelyne would later take credit for the success of Operation Bertram, the genuine and successful effort to deceive the Afrika Korps, British Army records tell a very different story.

In February 1942, Maskelyne was reassigned to entertain troops. By that summer he was comfortably installed in Cairo, giving shows to officers at garden parties.

The Truth About Maskelyne’s Magical Exploits Comes Out 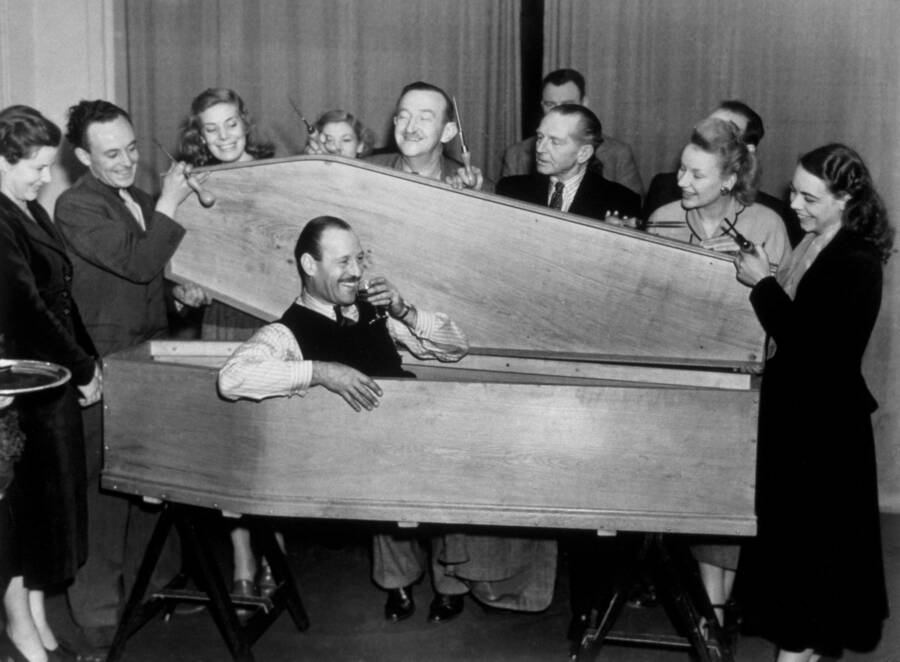 Photo by Keystone/Getty ImagesMaskelyne escaping from a coffin during a performance in 1949. While his genuine talent as an illusionist was never in doubt, later researchers revealed that nearly all of his wartime exploits were probably untrue.

Jasper Maskelyne left the British Army in 1946 with the rank of major, having spent the remainder of the war as a performer. Three years later, he released Magic: Top Secret, his thrilling tell-all which casts himself as the most important unsung hero of the whole North African campaign.

In 1950, he relocated to Africa, continuing his stage career while running a driving school before dying in 1973 in Nairobi, Kenya.

For decades, his fabulous claims went unchallenged — partly due to his relative obscurity, and partly because government records of wartime intelligence and deception were still top secret. With no official permitted to refute his outlandish tall tales, the legend of Jasper Maskelyne persisted.

His legend was further embellished by author David Fisher’s 1983 book The War Magician, which not only accepted Maskelyne’s stories as true, but embellished them by adding nonexistent characters, never-spoken words, and events created out of thin air.

The little-known myth became more widely known in 2003, when actor Tom Cruise was announced to be developing it for the screen. But when director Peter Weir noticed vast differences between the recollections Maskelyne’s son Alastair offered and Fisher’s book, the project was dropped.

In 2015, a second attempt at the film — this time starring Benedict Cumberbatch — seemed to be dead on arrival. But on March 16, 2021, Colin Trevorrow was announced as the director of The War Magician, with Cumberbatch assuming the role of Jasper Maskelyne.

The persistence of Maskelyne’s incredible tales of daring deceit is hardly surprising. Magic, after all, isn’t really magic — but a system of misdirection. Even the name itself is part of the trick.

Although a magician’s audience knows that what they’re seeing is merely a part of a performance, the fun of it all is to believe in the impossible.

Now that you’ve uncovered the truth about Jasper Maskelyne, learn about Operation Quicksilver, one of the most successful Allied deceptions of World War II which ensured victory on D-Day. Then, place yourself in the middle of the action in these stunning color photos of World War II.