According to a new book about the true story of “Catch Me If You Can,” many of Frank Abagnale Jr.’s alleged cons purportedly occurred while he was in prison.

Frank Abagnale Jr. was one of America’s greatest con men. He pretended to be a doctor, a Pan American airlines pilot, a Georgia lawyer, and a Brigham Young University professor. He claimed to have cashed over $2 million in bad checks and maintains that he was caught only to be offered work at the FBI. But new research into the true story of Catch Me If You Can, his hit memoir, suggests that this entire narrative may be Abagnale’s biggest hoax yet.

Catch Me If You Can was famously adapted by Steven Spielberg in 2002. The silver screen version truncated events and conflated characters to serve an acceptable run-time, but the source material itself was never broadly in question — until journalist Alan C. Logan tried to verify its many claims.

Logan remembered seeing the film years ago and leaving with a lingering feeling that things didn’t add up. It seemed impossible to maintain the charade of a lawyer for the attorney general’s office in Baton Rouge, and to navigate the world while making millions and evading the FBI as a teenager seemed preposterous.

According to WHYY, the award-winning science journalist finally did some digging into the true story of

The Many Cons Of Frank Abagnale Jr.

Frank Abagnale Jr. started his grift in the mid-1960s, according to his own telling and that of the film. Born in 1948, the young New Yorker began forging checks at 15. He claimed that his skills allowed him to travel the world in luxurious style for years. While those tales are now in doubt, his 1969 arrest was certainly real. 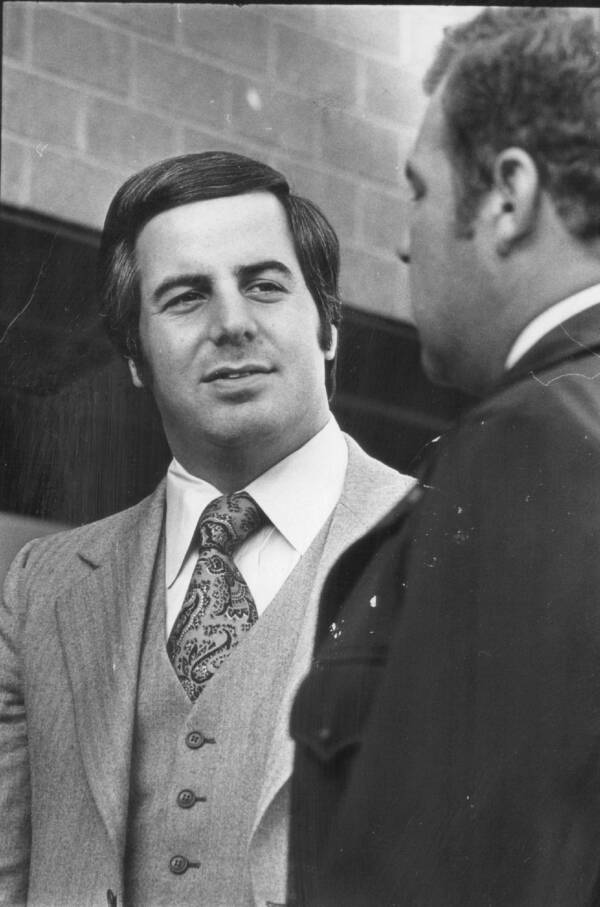 Abagnale claimed his capture in Montpellier, France was preceded by a string of adventures: fooling Pan American Airways as a pilot, practicing as a doctor in Georgia, teaching at Brigham Young University, and fleeing the FBI while becoming a lawyer for the Baton Rouge attorney general’s office.

He was finally caught in 1969 and sentenced to 12 years in prison. He claimed the federal government released him early to help the FBI catch like-minded con artists, but Logan found no bureau official ever having made a public statement on that relationship. There’s not even a record of Abagnale having passed the bar exam.

The Surprisingly Dark True Story Of Catch Me If You Can

Logan believes Abagnale managed to pull the wool over everyone’s eyes with lectures, television appearances, and a bestselling memoir. According to Esquire, it was the Hollywood adaptation, however, that rubbed Logan the wrong way.

“I remember just having this nagging feeling that something just wasn’t quite right about it,” said Logan. “And that was that. That thought, you know, went into the back of my mind for a couple of decades almost.” 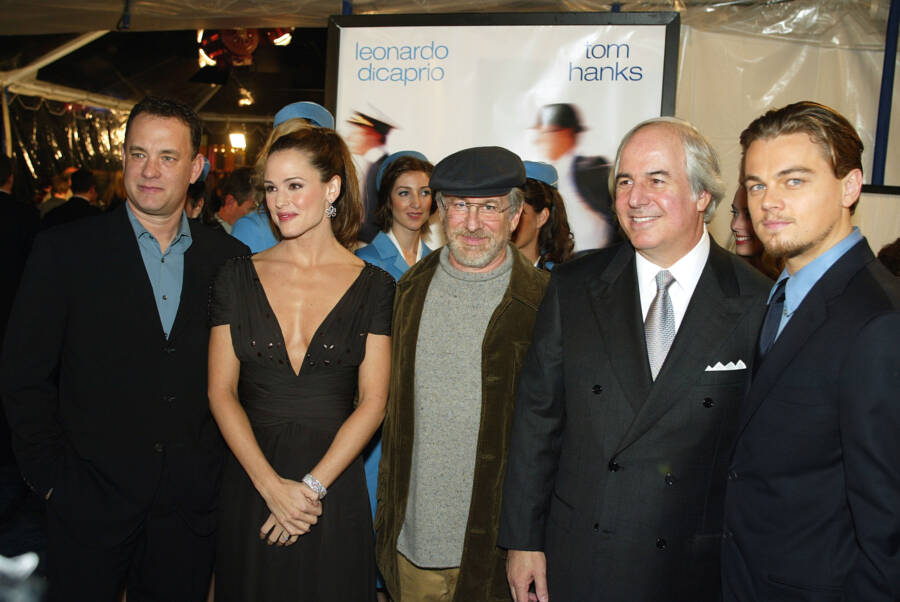 Logan’s new book The Greatest Hoax on Earth: Catching Truth, While We Can was forged out of public records and brand new interviews. He found that Abagnale’s most alluring con of impersonating a commercial airline pilot was instead a case of petty theft and stalking.

“What really happened was that, dressed as a TWA (Trans World Airlines) pilot, which he only did for a few weeks, he befriended a flight attendant called Paula Parks,” said Logan. “He followed her all over the Eastern Seaboard, identified her work schedule through deceptive means, and essentially stalked the woman.”

Abagnale purportedly even showed up at her New Orleans apartment one time. She tried to get rid of him by explaining she was going to visit her family in Baton Rouge. Instead, Abagnale invited himself to join her. 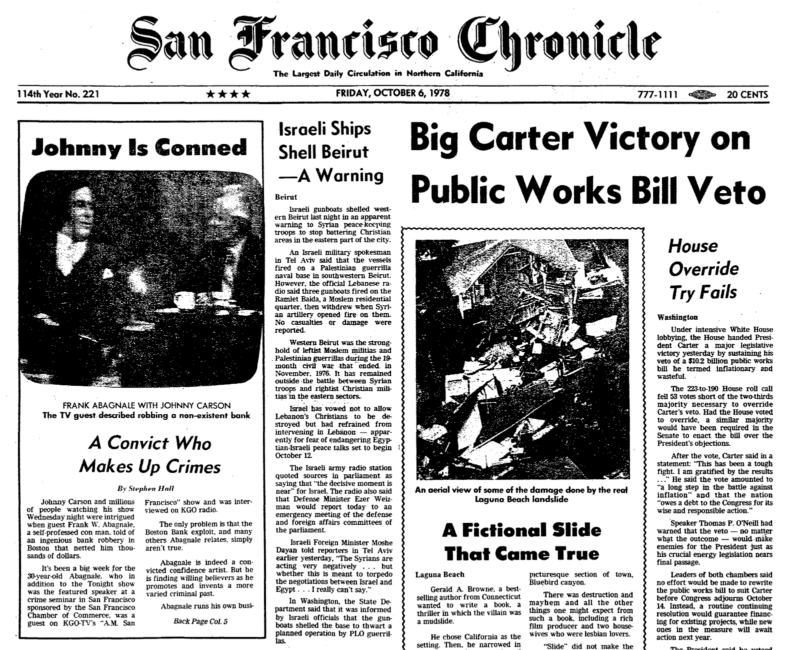 “So Frank Abagnale meets her parents in Baton Rouge,” explained Logan. “Frank and Paula…part ways, and a few days later, Frank Abagnale shows back up at the house in Baton Rouge and said, ‘Hey, I’m Paula’s friend. Remember me? I’m on furlough as a pilot.’ And they invited him in out of kindness.”

The generous family introduced Abagnale to their high-profile friends. Meanwhile, he stole $1,200 worth of checks from them and various businesses in the area — in stark contradiction to Abagnale’s narrative of only ever defrauding hotels, banks, and airlines.

The True Legacy Of A Lifelong Con Man

Logan believes Abagnale’s fabricated construct of himself began around 1977, after being paroled and nurturing his legend through speaking engagements and a To Tell The Truth game show appearance — which was recreated for the film.

This led to nationally televised interviews on shows like The Tonight Show with Johnny Carson, which cemented his narrative for good. Various local newspapers did expose some of Abagnale’s fabrications, but a lack of communication between publications before the internet saw these discoveries buried. 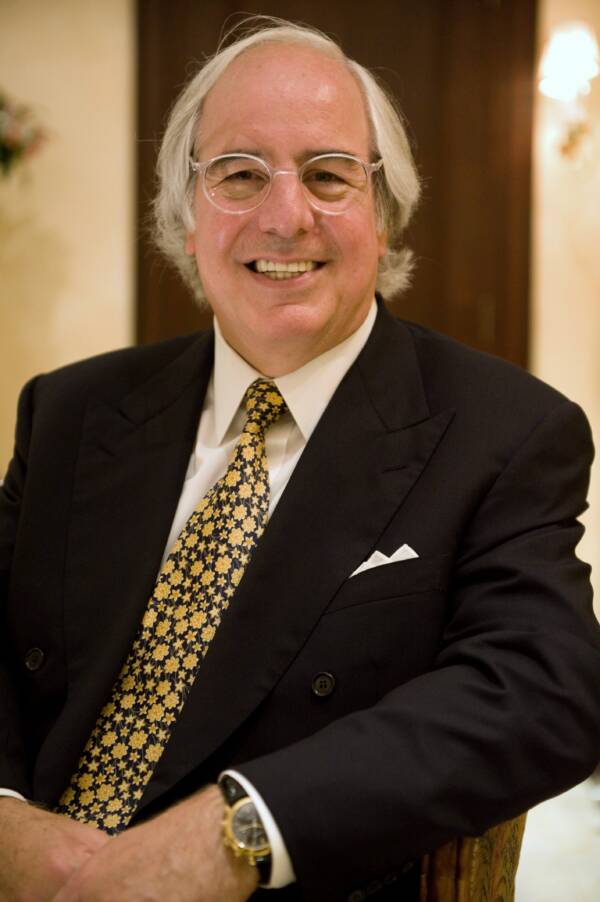 “So Abagnale’s narrative that between the ages of 16 and 20, he was on the run, chased all over the United States and even internationally by the FBI. This is completely fictitious,” said Logan. “Public records obtained by me show that he was confined for the most part in prison during those years.”

Logan even interviewed Pan Am spokesperson Bruce Haxthausen about their financial losses during the years in question — to shocking results.

“I’ve checked with the security people and everyone here, and it never happened. This is the first time we’ve heard of this, and we would have heard or at least remembered it if it happened,” said Haxthausen.

After reading about Frank Abagnale Jr. and the true story of Catch Me If You Can, learn about nine of history’s biggest con artists and the scams they almost got away with. Next, read about the ex-cop who rigged the McDonald’s Monopoly game for over a decade, raking in $24 million.