On May 5, 1821, Napoleon Bonaparte died in exile on the British-held island of Saint Helena. Though the cause was believed to have been stomach cancer, questions remain.

At a lonely house on a remote island in the South Atlantic Ocean, a somber group gathered around a dying man. As they watched, he mumbled a few words — something about the army — and then he was gone. Napoleon Bonaparte was dead.

But how did Napoleon die? Not in battle, as he may have hoped. Instead, the former French emperor and military commander spent his final days in exile. After losing the Battle of Waterloo to the British in 1815, he had been sent to Saint Helena, a British-held island off the coast of southwestern Africa.

There, after a few years of loneliness, he died on May 5, 1821. But Napoleon did not go quickly — or quietly. When he dictated his will in April, he said, “I die before my time, killed by the English oligarchy and its hired assassins.”

Officially, Napoleon’s death at age 51 was attributed to stomach cancer. But questions lingered, especially since his doctor had refused to sign the autopsy report. Some even wondered if he’d been poisoned.

Go inside the death of Napoleon Bonaparte — and the fraught aftermath.

The Rise And Fall Of Napoleon Bonaparte 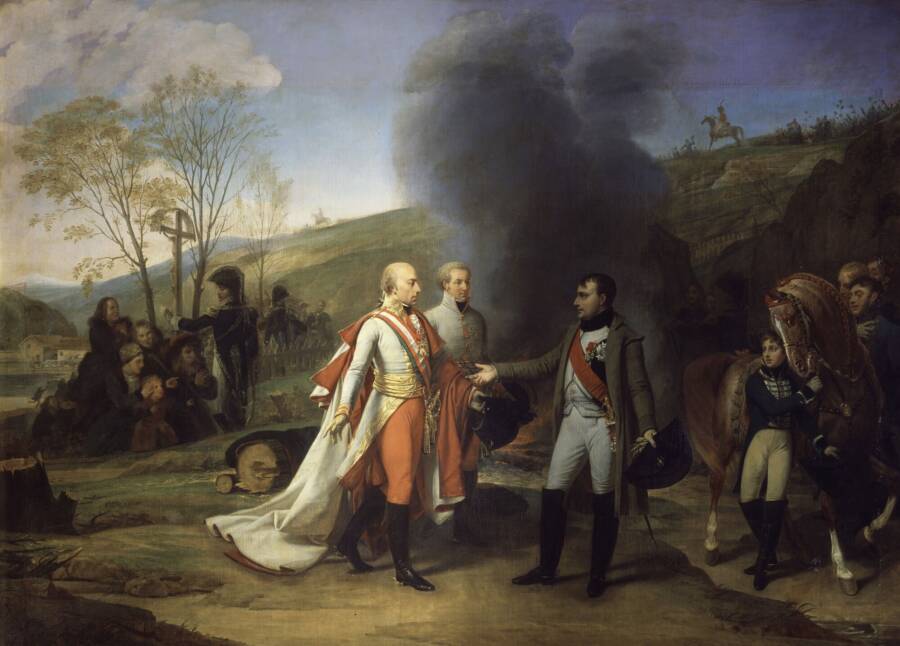 Before Napoleon died in exile, he enjoyed a meteoric rise that few others have experienced in history. But of course, it wouldn’t last forever.

Born on the French island of Corsica on August 15, 1769, Napoleon Bonaparte seemed an unlikely figure to become Emperor of France. He spoke with such a strong Corsican accent that his peers routinely mocked him.

But when the French Revolution broke out in 1789, the man met his moment. His military success at the Siege of Toulon in 1793 established him as a force to be reckoned with. And in 1795, 26-year-old Napoleon Bonaparte made political friends by stopping an uprising against the Republic in Paris.

From there, his ascent astounded all of Europe as he soon became a political powerhouse. A coup in 1799 saw him seize control of the French government. And five years later, the 35-year-old crowned himself emperor.

Napoleon Bonaparte seemed unstoppable. He racked up victories on the battlefield, overwhelming Russia and Austria at the Battle of Austerlitz in 1805 and smashing the 1,000-year-old Holy Roman Empire into dust. 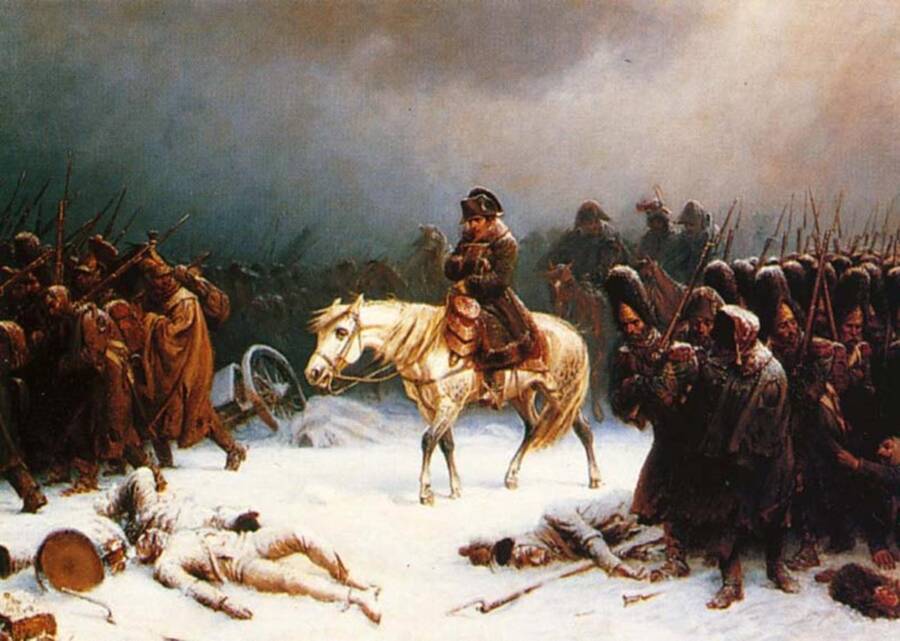 Wikimedia CommonsNapoleon Bonaparte in retreat from Moscow, during a campaign where he lost more than 400,000 men.

But Napoleon would overreach when he decided to invade Russia in 1812.

“I have come once and for all to finish off these barbarians of the North,” Napoleon boasted. “The [Russians] must be pushed back into their ice.”

Instead, the Russians would turn to fire. They burned villages and towns as they retreated, leaving the French troops with few enemies to fight and almost nothing to eat. By September 1812, the French found themselves in a nearly empty Moscow with little food — and winter was coming.

While the French eventually retreated, Napoleon lost hundreds of thousands of men. He was humiliated — and the rest of Europe smelled weakness. Austria, Prussia, Russia, and Sweden joined forces to defeat France at the Battle of Leipzig in 1813 — and closed in on Paris in April 1814.

As a result, Napoleon was forced to abdicate his throne. 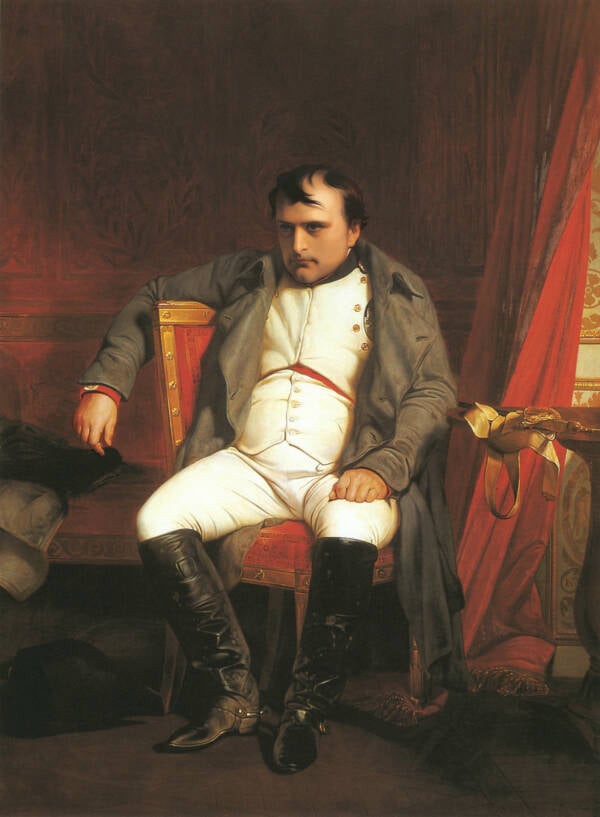 Wikimedia CommonsForfeiting his power and prestige, Napoleon abdicated his throne in 1814.

He was initially exiled to Elba, an island in the Mediterranean. But Napoleon escaped and tried to seize power in France again. He was ultimately defeated at the Battle of Waterloo in June 1815 — and sent back into exile. But this time, the powers of Europe were determined to make it stick.

They sent Napoleon Bonaparte to Saint Helena: a tiny, isolated island once described as “further away from anywhere else in the world.” 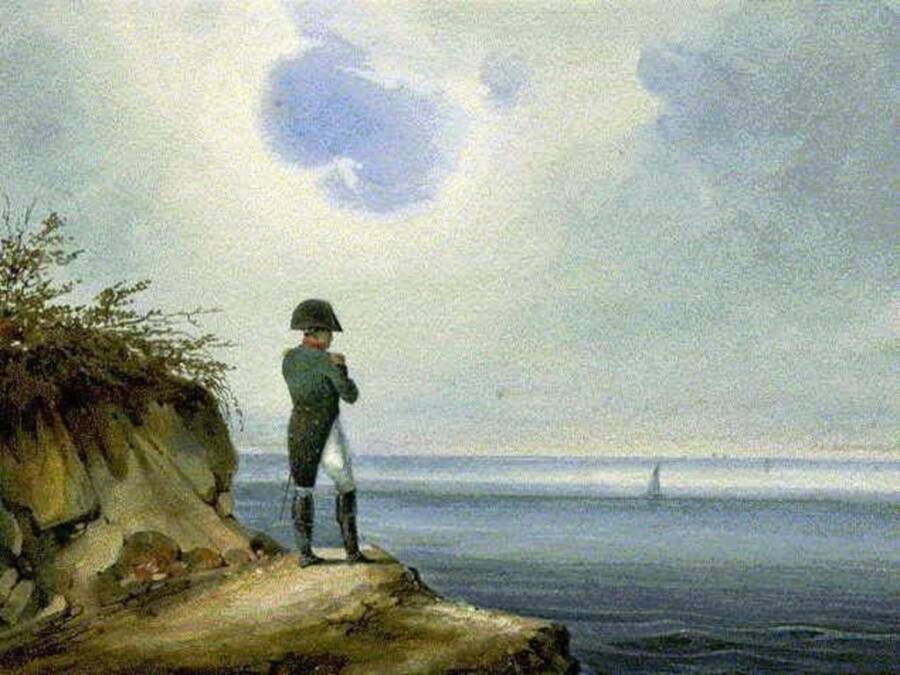 To Napoleon Bonaparte, exile on Saint Helena was a fate worse than death.

“To die is nothing,” he once said while living on the lonely island, “but to live defeated and without glory is to die every day.”

The former emperor had no one to rule. The once-mighty military commander had no more battles to win. Instead, Napoleon simply tried to fill his days by being as productive as he could. He gardened, read books, wrote his memoirs, and clashed with the island’s governor, Sir Hudson Lowe.

Napoleon’s military prowess was no match for the numbing boredom of life on Saint Helena. But before long, his situation became much worse as his health started to decline. By 1820, Napoleon became seriously ill. He suffered from abdominal pain, nausea, fevers, constipation, and diarrhea.

“Doctor, how I suffer!” the former emperor said. “Why did the cannon-balls spare me, only to die in this deplorable manner?” He went on: “I, that was so active, so alert, can now scarcely raise my eyelids.”

Napoleon knew the end was near. In April 1821, he dictated his will — placing blame for his early death at the feet of the British and requesting to be buried on “the banks of the Seine” back in France. 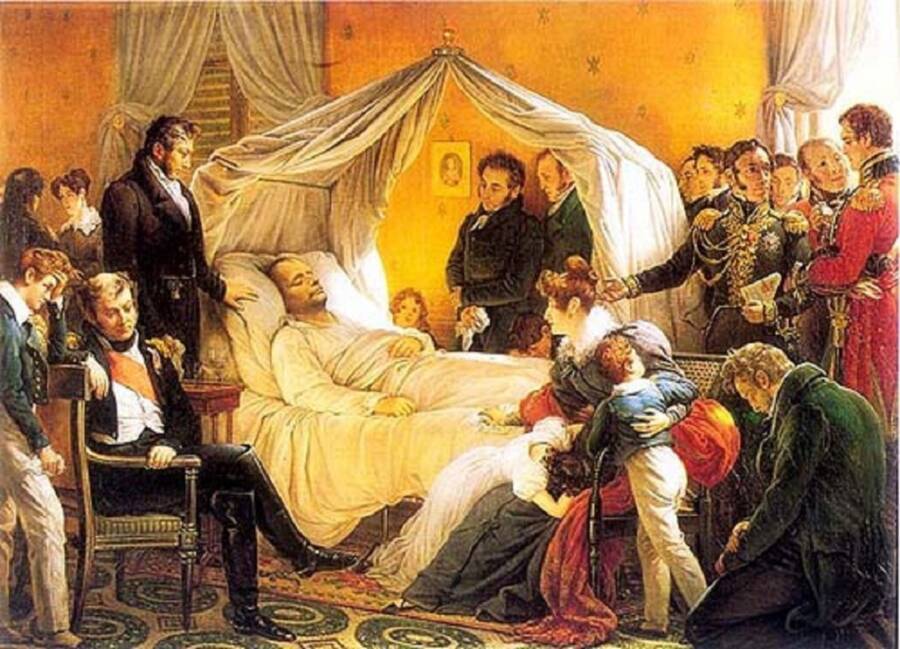 Napoleon MuseumNapoleon Bonaparte on his deathbed in 1821.

For weeks and weeks, the exiled emperor teetered between life and death. “We expected to see him pass away every moment,” said Louis-Étienne Saint-Denis, one of Napoleon’s most loyal companions. “And one or another of us was continually going to his bed to make sure he was still breathing.”

On May 5, 1821, things took a turn for the worse. “From three o’clock until half-past four there were hiccups and stifled groans,” remembered General Henri Bertrand, Napoleon’s Grand Marshal. “He appeared to be in great pain. He uttered several words which could not be distinguished and then said ‘Who retreats’ or definitely: ‘At the head of the Army.’”

Napoleon died that same day. He was 51 years old. “Alas!” Saint-Denis wrote. “There was left of the Emperor nothing but the mortal remains… what a sad, sublime spectacle was the death of a great man.”

A group of doctors would later attribute Napoleon’s death to stomach cancer. But the debate around his demise didn’t end there.

The Aftermath Of Napoleon Bonaparte’s Death 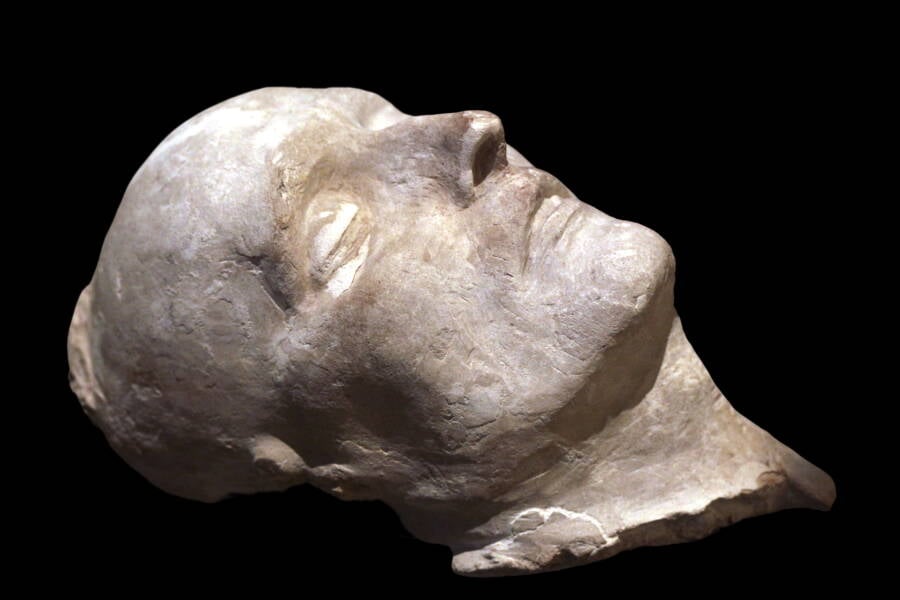 Wikimedia CommonsNapoleon’s death mask. Back then, it was customary to make these for a leader who’d recently died.

In life, Napoleon Bonaparte courted controversy. Depending on who you asked, he was either a hero or a villain. Nothing changed after he died.

First, the British and the French clashed over Napoleon’s autopsy. Several doctors who’d examined his body agreed that he died of stomach cancer. This made sense — Napoleon’s grandfather, father, brother, and three of his sisters had all died from stomach cancer as well.

But one of Napoleon’s doctors, Francesco Antommarchi, refused to sign the autopsy report — which raised some eyebrows. Shortly before Napoleon died, he had courted public sympathy by complaining about liver ailments. And after Antommarchi took a closer look at his body, he noted that Napoleon actually did have a large liver.

But the British allegedly didn’t want this reported in the autopsy. Apparently, they thought that if Napoleon had liver problems, it might imply that he got sick on Saint Helena — the very place where the British had sent him.

Next, the British and the French clashed over where the former emperor should be buried. Napoleon had requested that his remains be returned to France “surrounded by the French people, whom I love so dearly.”

But the British didn’t want a Napoleon shrine popping up in Europe. Ultimately, it was decided that he would be buried on Saint Helena. 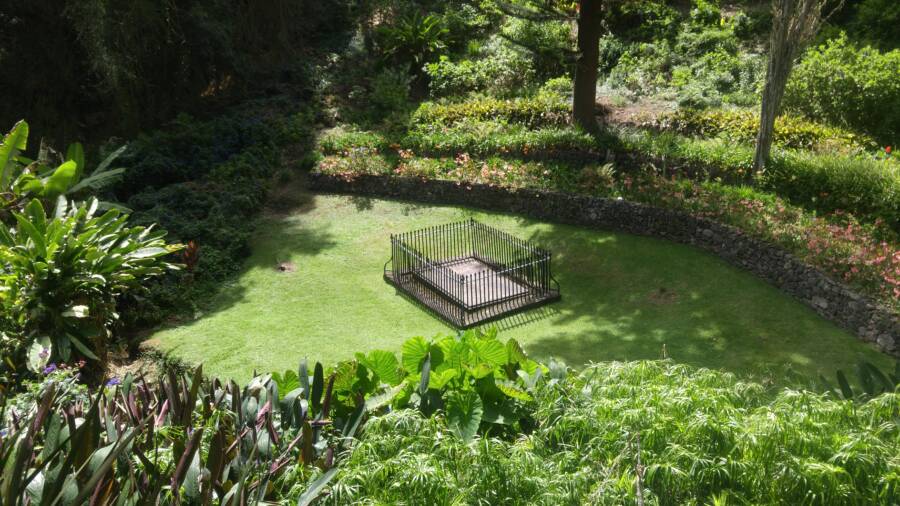 Wikimedia CommonsNapoleon’s body spent years on Saint Helena in an unmarked grave before his remains were returned to France.

And, finally, the British and French argued over what his gravestone should say. The French wanted it to read “Napoleon” — his name as emperor. The British, who were resistant to giving his reign any legitimacy, wanted the stone engraved with his full name: “Napoleon Bonaparte.”

Because neither side would yield, Napoleon’s body spent almost 20 years in an unmarked grave. It wasn’t until 1840 that the British — needing French cooperation with a separate political issue — agreed to return him to Paris. 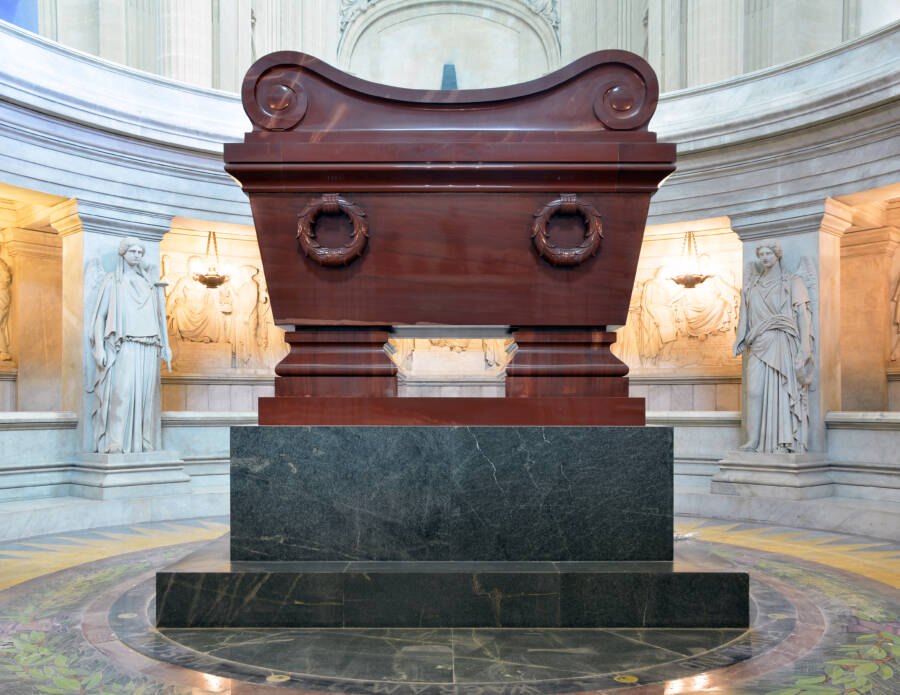 Officially, Napoleon Bonaparte died of stomach cancer. But after his death, some wondered if he had been murdered.

Those who believe in the murder theory often point to one “suspect”: Count Charles Montholon, a Frenchman who was living on Saint Helena with Napoleon. A big reason why he came under suspicion is that some historians think Montholon was an agent of French royalists. If that were true, he may have been determined to make sure Napoleon never seized power again.

And so, as the theory goes, Montholon supposedly poisoned Napoleon with arsenic — by putting it into his wine. Eerily, some locks of Napoleon’s hair preserved after death showed arsenic levels 38 times higher than normal.

“There’s nothing improbable about the hypothesis of arsenic poisoning,” insisted Frank McLynn in his 2002 biography of Napoleon Bonaparte.

But more recent findings suggest that the initial autopsy report, back in 1821, was correct. While the arsenic levels are obviously alarming, it’s important to understand that arsenic was far more commonplace during the 19th century. Back then, it was used in medicine, food products, and hair tonic.

Furthermore, Napoleon’s symptoms matched up with those experienced by stomach cancer patients. And a study of pants that he wore in Saint Helena revealed that he had a smaller waist there than he did in France — and likely lost 30 pounds before his death. While that would be expected of someone with stomach cancer, the same would not be true for arsenic poisoning.

Additionally, Napoleon’s skin and fingernails were described as “pale” — while a fatal dose of arsenic would’ve likely caused discoloration.

While we’ll probably never know for certain, it’s quite likely that Napoleon really did die of stomach cancer. That said, it’s also not unreasonable to consider the fact that he was still a controversial figure in some circles — even as he languished in exile. And there were certainly some people out there who would’ve jumped at the chance to take him out.

The very fact that the question was asked — and endured for so long — suggests that the British failed in suppressing interest in Napoleon when they exiled him to Saint Helena. Napoleon Bonaparte may have died a lonely death — but it’s certain that his life will continue to loom large in history.

After reading about Napoleon’s death, check out these Napoleon Bonaparte facts you didn’t learn in school. Then, take a look at the volcanic eruption that may have led to Napoleon’s defeat.