Between 1987 and 1991, a masked attacker known only as Mr. Cruel broke into the homes of three Australian families, bound the parents, and disappeared with one of the daughters.

On the morning of Aug. 22, 1987, a masked man known only by his moniker, Mr. Cruel, broke into a family’s home in the quiet suburb of Lower Plenty on the outskirts of Melbourne, Australia.

He forced both parents onto their stomachs, bound their hands and feet, and locked them in a closet. Then, he tied their seven-year-old son to a bed and attacked the 11-year-old daughter. He cut the phone lines and left.

The intruder then embarked on a sadistic abduction spree that saw four Melbourne children disappear until 1991. But no one could stop Mr. Cruel — because no one could identify him.

On that Australian winter morning in 1987, Mr. Cruel established himself as a boogeyman that would strike fear into parents and children alike for over a decade.

After the twisted attack on the family in Lower Plenty, the police were called, and their investigation began. 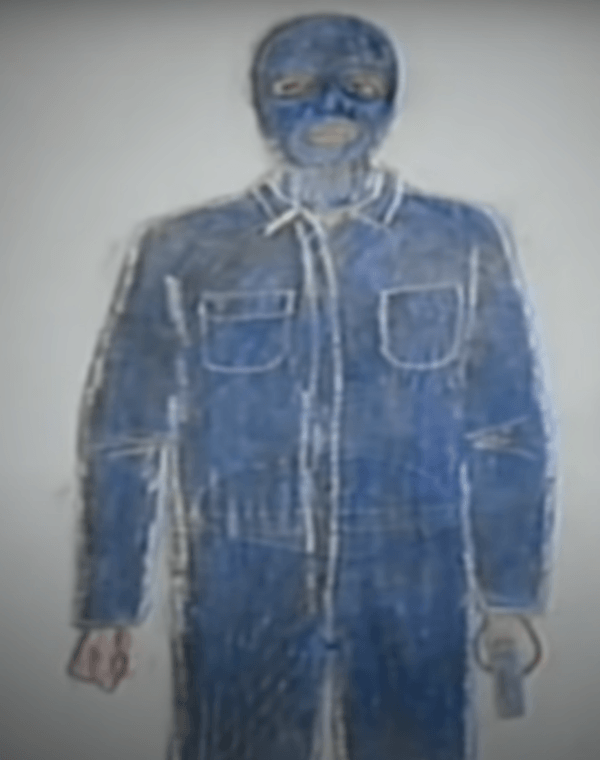 The family told them that after detaching a pane from their living room window, the balaclava-clad criminal made his way to the parents’ bedroom, clutching a knife in one hand and a gun in the other.

To subdue them, the intruder utilized a type of knot most commonly used by sailors or at least those with some nautical experience.

Over the course of the next two hours, Mr. Cruel raped their 11-year-old daughter. When he finally left, he pilfered a box of records and a blue jacket.

The little girl was eventually able to tell police that the intruder used the family phone to call someone else during one of his breaks in attacking her.

From what the girl heard, this call was a threatening one, with the man demanding the person on the other end of the line to “move their children” or they would “be next,” and he referred to this unknown person as “bozo.”

Police then checked the family’s phone records, but there was no record of this call whatsoever.

It would later become clear that this was Mr. Cruel planting a red herring to purposely confuse investigators. He would successfully throw them off his scent for years.

A Second Horrifying Abduction Outside Melbourne

It was over a year before Mr. Cruel struck again. 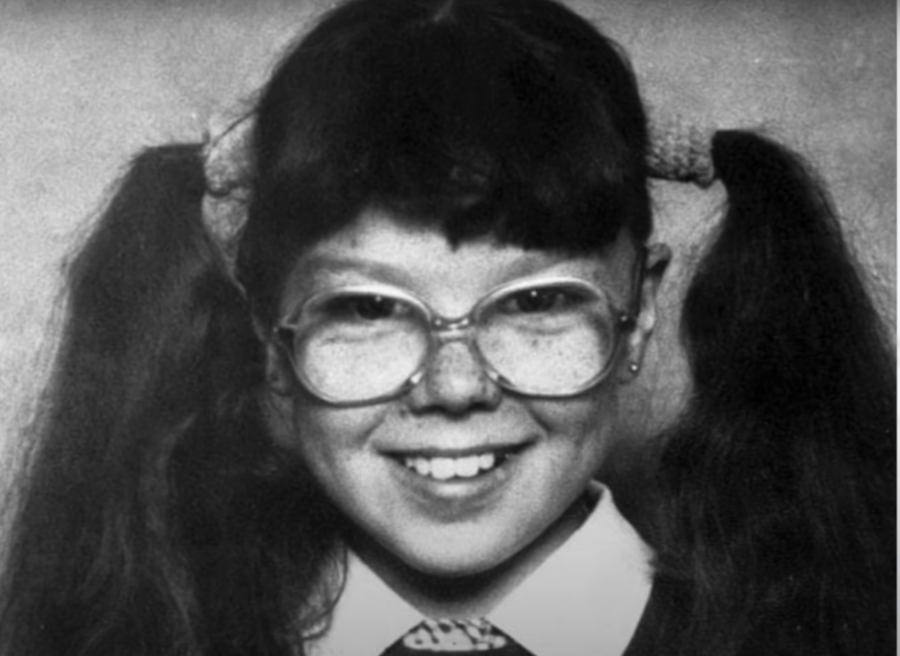 Just days after Christmas in 1988, John Wills, his wife, and their four daughters were fast asleep in their Ringwood-area home, a couple of miles southeast of where the previous crime had taken place.

Wearing dark blue overalls and a dark ski mask, Mr. Cruel broke into the Wills’ home and held a gun to John Wills’ head. As before, he clutched a knife in his other hand and told the parents to roll onto their stomachs, then he bound and gagged them.

The intruder assured the Wills that he was only there for money, but then he methodically cut the phone lines and made his way into the bedroom where the four Wills daughters all slept.

Addressing 10-year-old Sharon Wills by name, the man quickly woke her up, blindfolded and gagged her, then picked up a few items of her clothing and fled the house with her early the next morning.

After freeing himself and noticing that the phone lines were cut, John Wills rushed next door to the neighbors’ house to use their phone to call the police. However, Mr. Cruel was long gone, and so was Sharon Wills.

But 18 hours later, a woman stumbled upon a tiny figure standing on a street corner just after midnight. Dressed in green garbage bags, it was Sharon Wills. As Sharon Wills was reunited with her family, she gave police some startling clues as to who her attack could be.

Because Wills was blindfolded throughout her assault, she was unable to give a full physical description of Mr. Cruel, but she did recall how shortly before letting her go, the suspect made sure to give her a thorough bath.

He not only washed off any forensic evidence he had left behind but also clipped her fingernails and toenails and brushed and flossed her teeth.

Investigators quickly tied this incident to the previous one in Lower Plenty, and a domain of fear and apprehension was beginning to take shape in the Melbourne suburbs. 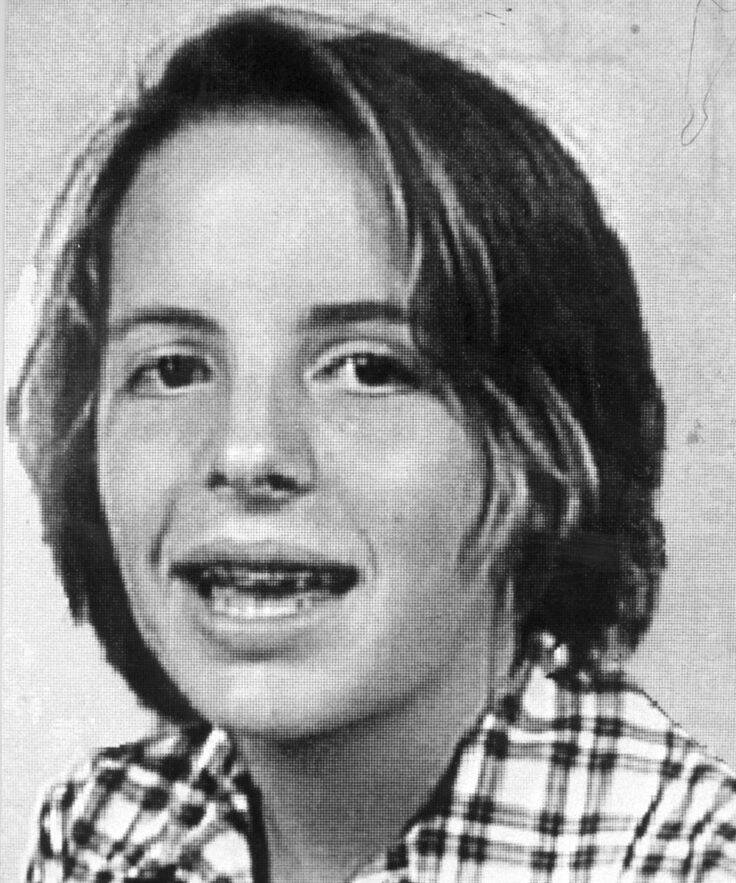 DailyMailFifteen-year-old Nicola Lynas, pictured here, was molested for 50 hours by the masked abductor.

Mr. Cruel struck a third time on July 3, 1990, in the suburb of Canterbury, Victoria, which is west of Ringwood and south of Lower Plenty.

Here resided the Lynas family, a well-off English family who’d been renting a house along the prestigious Monomeath Avenue. This distinguished neighborhood had been home to plenty of Australian politicians and public officials in its time, making it a secure area to live in — or so many believed.

On that day, Brian and Rosemary Lynas were attending a farewell party and left their two daughters home alone. Then, just before midnight, 15-year-old Fiona and 13-year-old Nicola were woken by the ranting, commanding orders of a masked intruder.

Armed with his usual gun and knife, he instructed Nicola to go into another room to pick up her Presbyterian Ladies College school uniform while he tied up Fiona in her bed.

Mr. Cruel informed Fiona that her father would need to pay him $25,000 for Nicola’s return, and then he took off with his young victim in the family’s rental car, which was parked in the driveway. 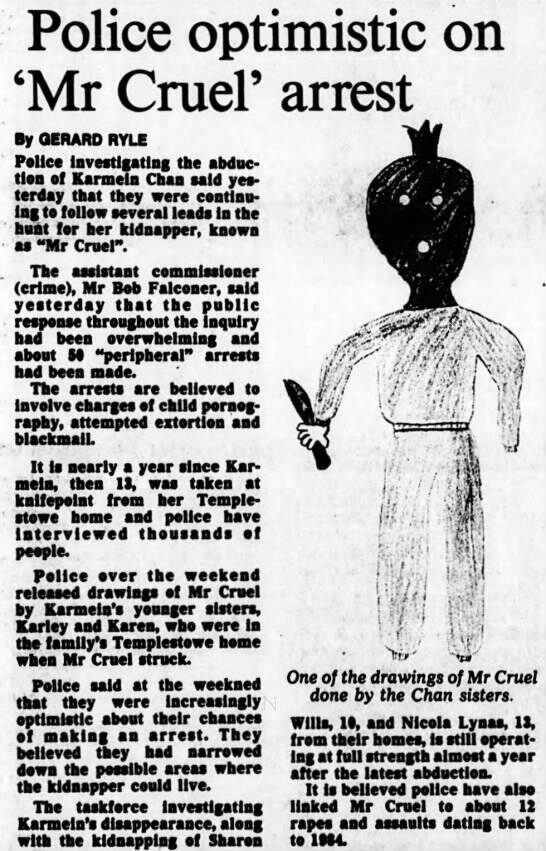 FacebookA drawing made by Karmein Chan’s sister of Mr. Cruel alongside a newspaper article about the case.

Mr. Cruel drove about a half-mile down the road, parked, and then transferred to another vehicle.

Just 20 minutes after the abduction, Brian and Rosemary Lynas returned back home where they found 15-year-old Fiona tied to her bed with a ransom message.

And then, just a few days later, Nicola was dropped off at an electricity station not far from her home. She was fully dressed, wrapped in a blanket, and still blindfolded.

When she was confident that Mr. Cruel had driven away, she removed the blindfold and shakily made her way to a nearby house. It was just after two in the morning when she phoned home.

Police Remain Baffled About The Case 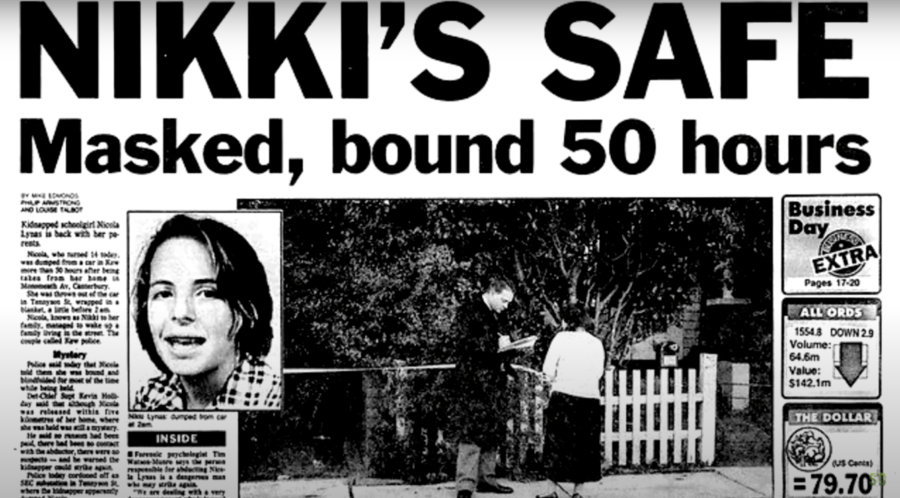 YouTubeNewspaper headline after Nicola Lynas was freed by Mr. Cruel.

Nicola was able to offer the investigators some details that were vital to the investigation. Most notable among them was a rough estimate of the attacker’s height, which was about five-foot-eight.

She also revealed that the suspect possibly had reddish-brown hair.

Some details of her ordeal were more horrifying. She revealed that throughout her time in captivity, she was forced to lay down into a neck brace contraption fastened to the abductor’s bed, restraining her while she was abused.

She said she heard him speaking aloud to another person, but she never heard a response. Investigators weren’t entirely sure whether this meant there was an accomplice, but it’s more likely that this was another one of Mr. Cruel’s many red herrings.

Months after the Lynas family moved back to England, Nicola told investigators that she heard a low-flying aircraft while in her abductor’s home. Investigators thought that this meant the suspect lived in the surrounding vicinity of the nearby Tullamarine Airport, more than likely in its direct flight path.

Still, there wasn’t enough evidence to make an arrest, and Mr. Cruel’s worst deeds were yet to come. 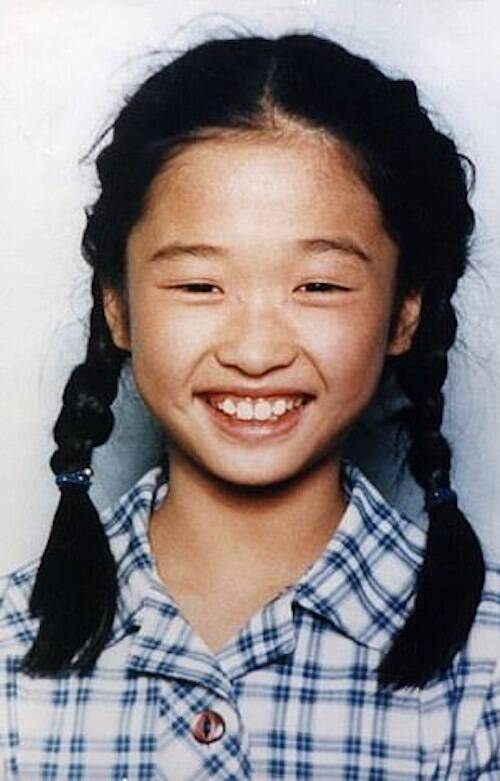 Police HandoutThirteen-year-old Karmein Chan was never returned to her parents alive. Her mother believes it’s because she fought too hard against her attacker.

On April 13, 1991, Mr. Cruel broke into the home of John and Phyllis Chan in the affluent Templestowe district of Victoria. That night, they trusted their 13-year-old daughter Karmein to watch over her two younger siblings.

It seemed Mr. Cruel knew this, as detectives believed he would stake out his victims for weeks or even months ahead of time, learning their habits and movements.

At roughly 8:40 that evening, Karmein and one of her sisters headed to the family’s kitchen to make some food when they were startled by Mr. Cruel in his balaclava and a green-grey tracksuit.

“I only want your money,” Mr. Cruel lied to three girls, forcing the two younger siblings into Karmein’s wardrobe. He claimed he wanted Karmein by herself to show him where the money was, and he pushed the bed in front of the closet to lock the two youngest sisters in as he made his escape.

Minutes later, the two frightened sisters managed to push open the wardrobe doors and immediately called their father at the family restaurant.

By the time the police arrived, they knew what to expect; they’d been to enough of Mr. Cruel’s crime scenes to know what had taken place.

The Failure Of Operation Spectrum 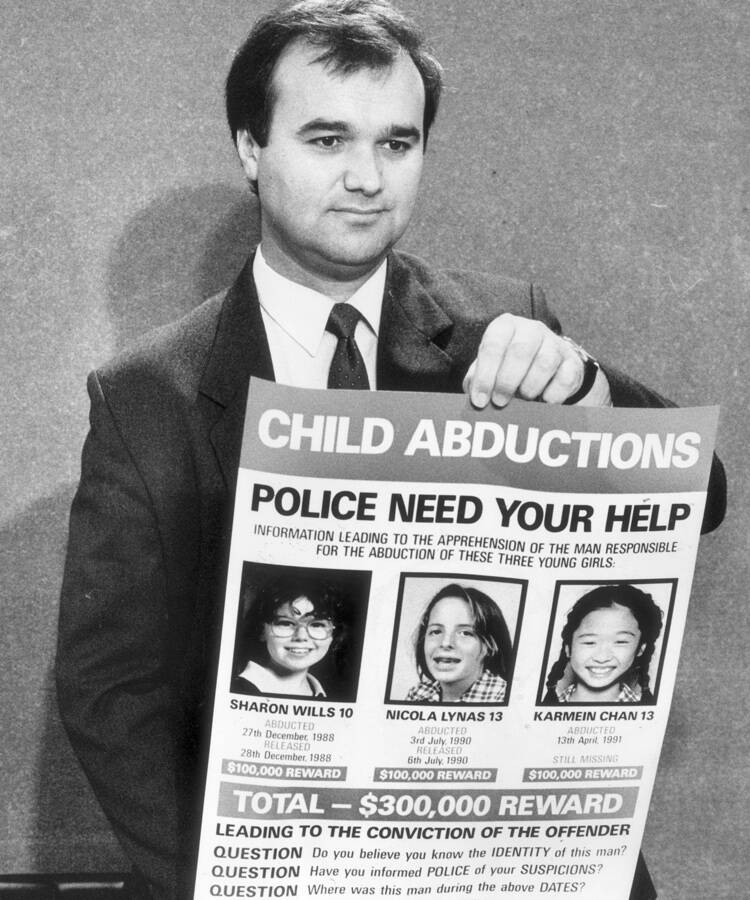 Investigators found a note written in large, bold letters on Phyllis Chan’s Toyota Camry shortly after the abduction. It read, “Pay back, Asian drug dealer. More. More to come.” But after combing John Chan’s background, this proved to be just another one of Mr. Cruel’s red herrings.

Days later, the Chan’s posted an encrypted letter in the local paper, using a cipher that Karmein Chan would have been able to decrypt. They offered a hefty $300,000 ransom in exchange for the safe return of their daughter.

Karmein Chan’s abduction triggered one of the largest manhunts in Australian history, known now as Operation Spectrum. It was a multi-million-dollar undertaking that devoured tens of thousands of police man-hours, alongside the many thousands more of volunteer hours.

Sadly, Karmein would never be reunited with her family.

Nearly one year after Karmein’s abduction, on April 9, 1992, a man walking his dog in the close-by area of Thomastown, happened upon a fully decomposed skeleton. This was eventually revealed to be Karmein Chan. 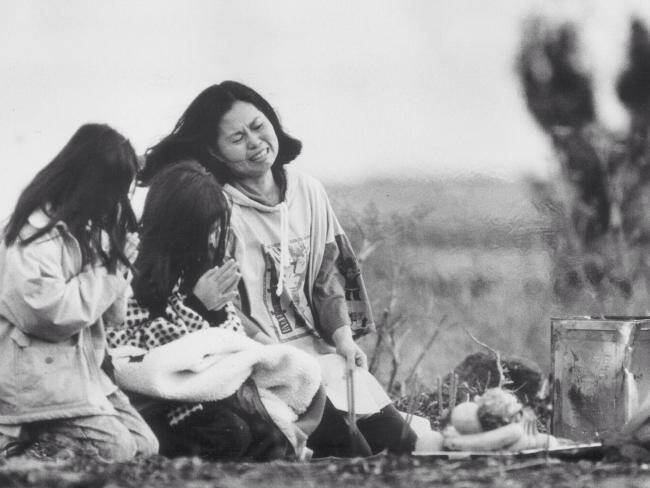 Twisted HistoryKarmein’s mother at her grave.

An autopsy revealed that Karmein Chan had been shot three times in the head, execution-style, probably not long after her abduction.

Theories have swirled as to why Mr. Cruel murdered Karmein when he released all his other victims. Karmein’s mother theorizes that because her daughter was stubborn and would have fought against her attacker, she likely learned too much about him for him to let her go.

Operation Spectrum continued for the next few years to search for Mr. Cruel. The 40-member task force investigated over 27,000 potential suspects, collected over tens of thousands of tips from the public, and searched over 30,000 houses in the hopes of turning over a single clue.

Spectrum was eventually shelved for good in 1994, and with it went any potential leads on the Mr. Cruel case. As of this writing, Mr. Cruel remains one of Australia’s most wanted criminals.

After reading about Mr Cruel, check out 27 Victorian death photos alongside the disturbing history that went with them. Then, take a look at the mysterious story of nine Russian hikers who disappeared at the Dyatlov Pass.