In 1956, the King of Rock ‘n’ Roll got his polio vaccination on live TV — and helped America turn the corner in the epidemic.

While innovations in technology and medicine inspire hope in humanity, existential threats like climate change and global pandemics still inspire fear and force people to step up. At times, meaningful activism some from unexpected places — like Elvis Presley using his stardom to normalize lifesaving vaccines.

When Presley appeared on The Ed Sullivan Show in October 1956, he was on the verge of unprecedented fame. It was the most popular program on TV, with more than a third of America’s 168 million citizens having watched his previous appearance. The king had returned to roll up his sleeves, but not to make fans swoon.

Presley was letting the press document medical officials injecting him with the polio vaccine. The virus afflicted 60,000 children a year, but rare fatalities from the new Jonas Salk vaccine left people hesitant to get the shot. Within six months of Presley’s stunt, however, teen immunization rates rose — from 0.6 to 80 percent.

Born on Jan. 8, 1935, in Tupelo, Mississippi, Elvis Aaron Presley became an American star and cultural icon the world had never seen. While he began recording in Memphis, Tennessee as a teenager, his career truly blossomed in 1955, when interest from RCA Victor led to a major record label deal. 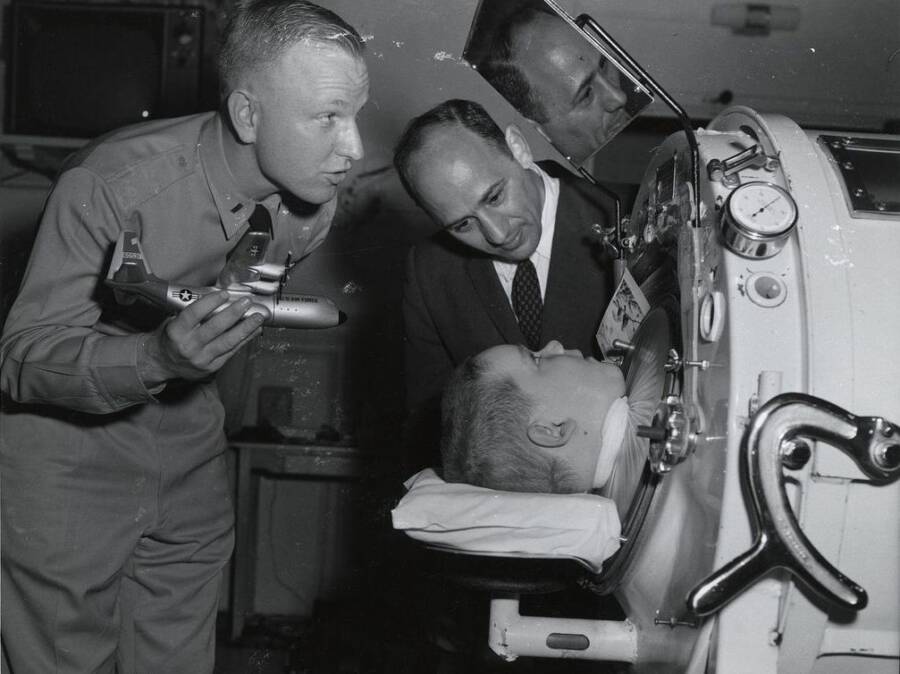 Wikimedia CommonsMany polio-afflicted children had to be placed in “iron lung” respirators to survive.

Under the management of Colonel Tom Parker, Elvis Presley’s rockabilly music was molded into chart-topping rock and roll with mainstream appeal. His first single, “Heartbreak Hotel,” in January 1956 became the number one song in the country, with his silver screen debut in Love Me Tender coming later that year.

And at the time, no tool wielded more social influence than the television. Presley and his manager were well aware, landing him interview spots and performance slots on late-night talk shows. His national TV debut on the Dorsey Brother’s Stage Show in January 1956 was only the beginning.

Presley’s first appearance on The Ed Sullivan Show on Sept. 9, 1956, was not only a boon for the fledgling superstar but showed CBS executives what a ratings draw the singer truly was. The record-breaking guest spot saw about 60 million people — or 82.6 percent of national television audiences — excitedly tune in to watch. 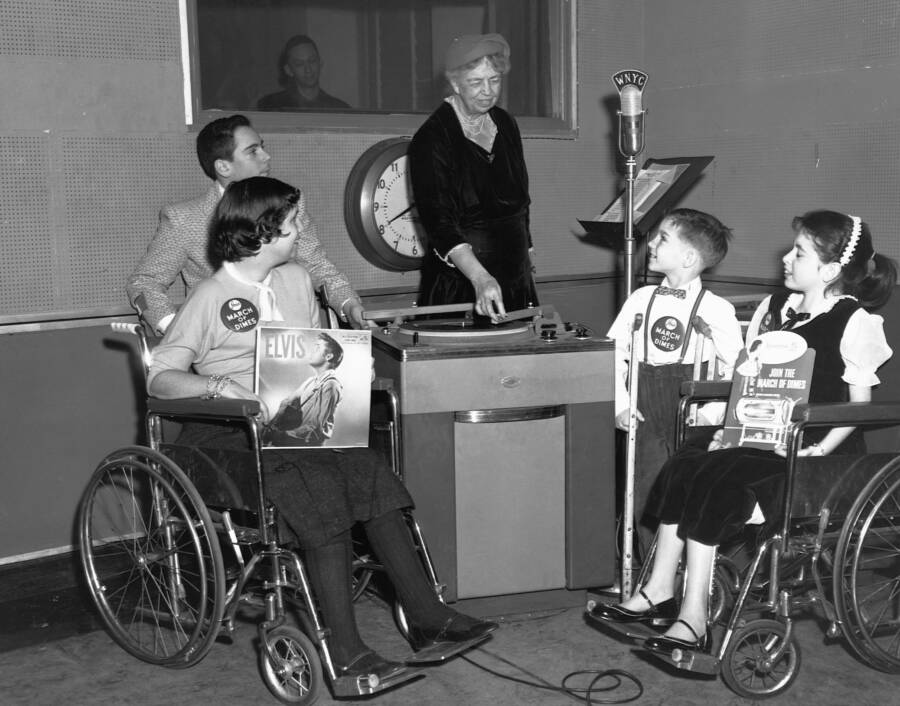 Polio had been ravaging the country for years, with more than 35,000 people annually paralyzed during the height of outbreaks in the 1940s. The virus killed two out of 10 people it paralyzed, gravitating to the immune systems of children. In 1952, it killed 3,000 people. It was 1955 when the Jonas Salk vaccine finally arrived.

Unfortunately, an early batch had tragically paralyzed and killed a number of early recipients. Concerned citizens hesitated to get the life-saving vaccine, with only 10 percent of New York City teenagers opting in by 1956. Meanwhile, national teenage immunization levels were sitting dangerously low — at 0.6 percent.

Elvis Presley Gets The Polio Vaccine

Resourceful public health officials rapidly realized that both television and pop culture might be of use. New York City Commissioner of health Leona Baumgartner hoped to use Elvis Presley to turn the tide. It would be an unprecedented public health stunt, with the King of Rock and Roll graciously agreeing to help. 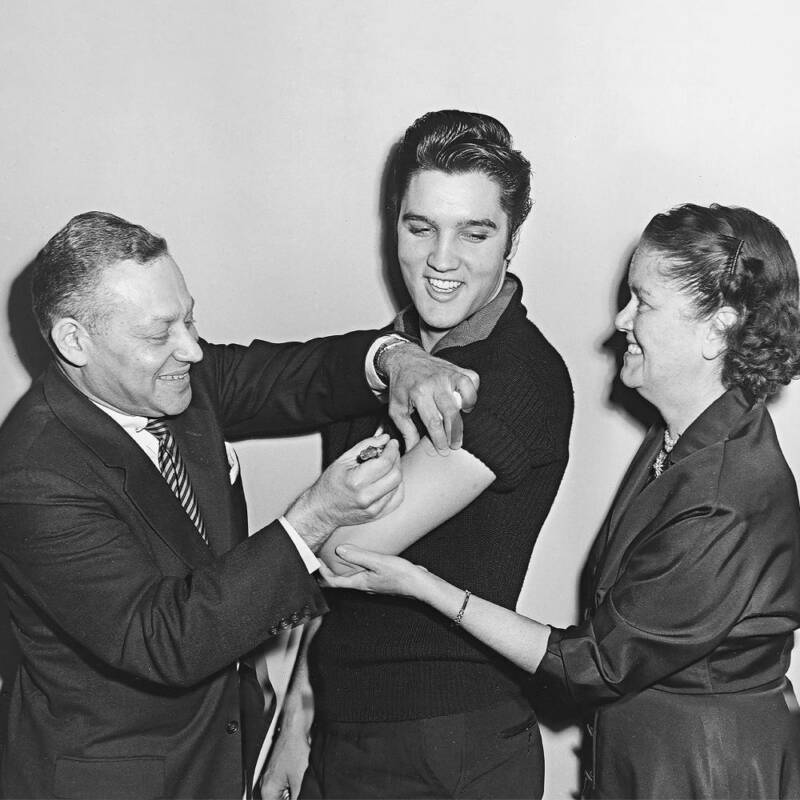 Naturally, Elvis Presley would perform a roster of his hits as a guest on the Oct. 28, 1956, episode of The Ed Sullivan Show. His silky-smooth voice crooned songs like “Hound Dog,” “Don’t Be Cruel,” and “Love Me Tender,” which would be soundtrack the film of the same name the following month.

Before he took the stage at CBS Studio 50 in New York City, however, journalists gathered backstage to watch Presley roll up his left sleeve and let Assistant Commissioner of Health Harold Fuerst administer the polio vaccine. Moments later, the smiling 21-year-old star walked onstage to do his job.

“He is setting a fine example for the youth of this country,” said Baumgartner. 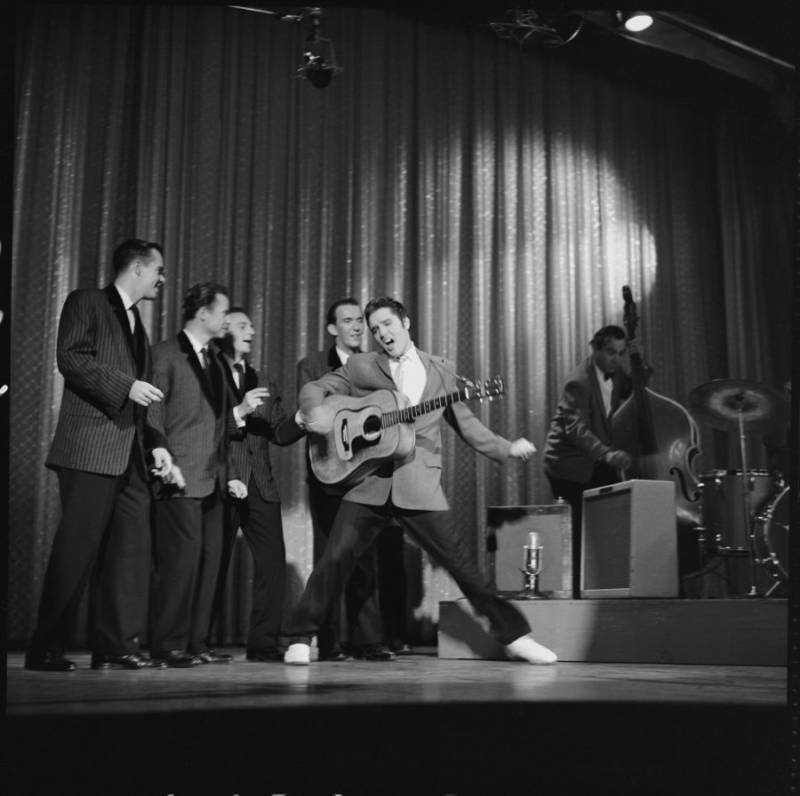 University of Bristol professor Stephen Mawdsley argued that the stunt “was obviously a help in getting teenagers to take up the vaccine but — intriguingly — not an overwhelming one.” The statistics suggested otherwise, however, as U.S. polio cases dropped by 81 percent between 1955 and 1957.

On the other hand, the National Foundation for Infantile Paralysis (or March of Dimes) organization had also begun to mobilize dramatically during that period. They not only informed the public with pamphlets but managed to get public health officials to subsidize the previously exorbitant costs of injection.

Ultimately, the Jonas Salk vaccine that had scared so many teenagers had turned appealing. While Elvis Presley may not have been the only reason, but he undoubtedly helped vanquish the stigma. For months, he would even sign photos for any fan club that showed their members were vaccinated.

After learning about the Elvis Presley getting Americans to accept the polio vaccine, read about nine vaccine myths that refuse to die. Then, learn about the death of Elvis Presley.