On October 31, 1993, actor River Phoenix died of a drug overdose outside the notorious Viper Room nightclub in Hollywood. He was just 23 years old.

Getty ImagesBefore the untimely death of River Phoenix, he had been struggling with cocaine and heroin abuse.

Few movie stars of the early 1990s were as beloved as River Phoenix. Famous for his acting talent as well as his good looks, Phoenix seemed like he was destined for greatness. Sadly, hard drugs and Hollywood nightlife shattered that dream — and led to his death on October 31, 1993, at age 23.

Friends knew that River Phoenix had been abusing drugs, but his fatal overdose still came as a shock to many people. After all, the actor appeared to be turning the corner. He reportedly stayed sober for two months while filming the movie Dark Blood in Utah and New Mexico.

Sadly, when he returned to Los Angeles in late October 1993, he almost immediately went on a “massive” drug binge. Tragically, this would culminate in his death outside the notorious Viper Room nightclub.

At the time, the Sunset Boulevard venue was partly owned by Johnny Depp. So despite its divey and dingey reputation, it was a haven for celebrities to escape the limelight and kick back like civilians. It also allowed them to take drugs without fans or paparazzi chronicling their benders.

But River Phoenix’s death cast a dark shadow on The Viper Room — which haunts the venue to this day. To see such a promising young actor die so suddenly was heartbreaking, especially for his loved ones.

That fateful night, a bouncer had escorted Phoenix outside the nightclub — where he instantly dropped to the ground. Much to the horror of his siblings and girlfriend, he started going into convulsions. Though his loved ones quickly called 911, it was already too late to save him. 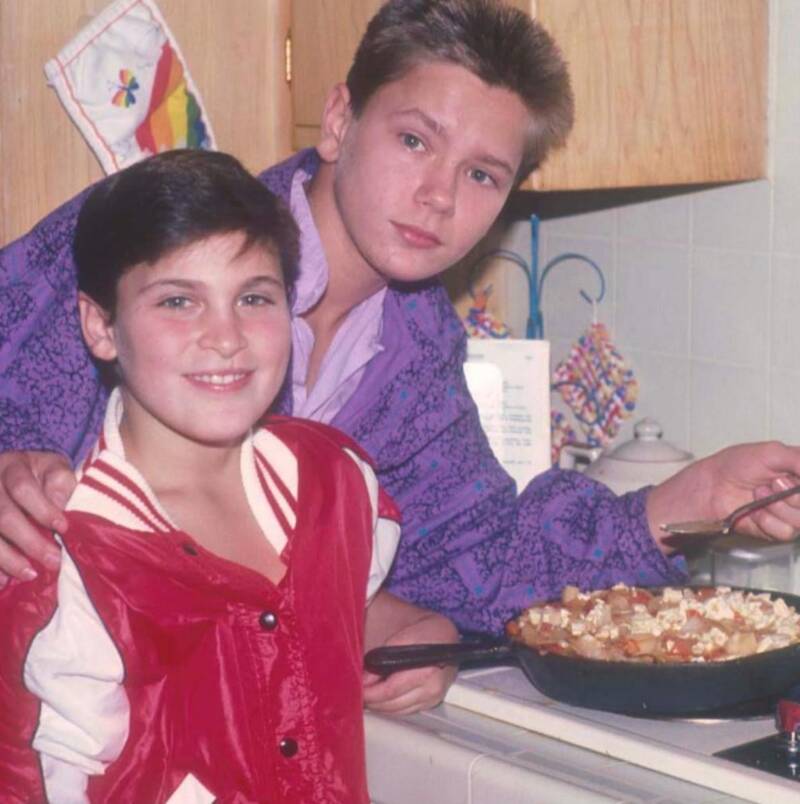 Wikimedia CommonsRiver Phoenix and his younger brother Joaquin, pictured in the early 1980s.

Despite his untimely death, River Phoenix left a huge mark on the world — not only as a talented actor but also as a passionate animal rights activist and environmentalist. But before Phoenix entered Hollywood, his early life was a humble one — and quite unconventional.

Born River Jude Bottom on August 23, 1970, Phoenix spent his first days on a farm in Oregon. But he didn’t stay there for long. His parents — John Lee Bottom and Arlyn Dunetz — were known for their nomadic lifestyle and financial instability. So they moved around quite a bit with their baby son.

As the oldest of five children — including Oscar-winning actor Joaquin Phoenix — River had perhaps the most bohemian childhood of them all. Unfortunately, his childhood was also full of trauma. 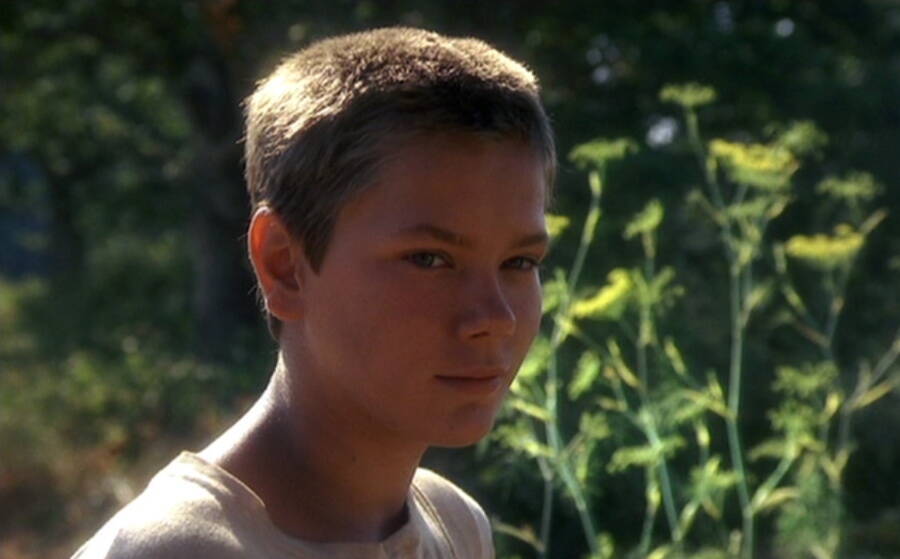 Columbia PicturesRiver Phoenix in Stand By Me, the 1986 movie that helped make him a star.

In 1972, River Phoenix’s parents decided to join the Children of God cult. Led by David Berg, the group would later become infamous for its widespread sexual abuse — especially of children. And while the Phoenix family reportedly left before the abuse became rampant, River later said that he was raped at the age of four while his family was still active in the cult.

While working as missionaries for the controversial group, the family shuttled between Texas, Mexico, Puerto Rico, and Venezuela. As for River, he often played guitar and sang on the streets for money. As a young entertainer, he was also expected to pass out information about the Children of God group — around the same time when he was allegedly enduring horrific abuse.

By 1978, Phoenix’s parents had grown disillusioned with the group and returned to the United States. They soon changed their last name to Phoenix, converted to veganism, and moved to California. There, River started auditioning — which led to some appearances on TV shows.

But it was River Phoenix’s role in the 1986 movie Stand By Me that really got Hollywood’s attention. Before long, he was starring in other major films like 1988’s Running On Empty and 1991’s My Own Private Idaho. By the early 1990s, he had become a Hollywood star — albeit one with a serious drug problem.

The Tragic Story Of How River Phoenix Died 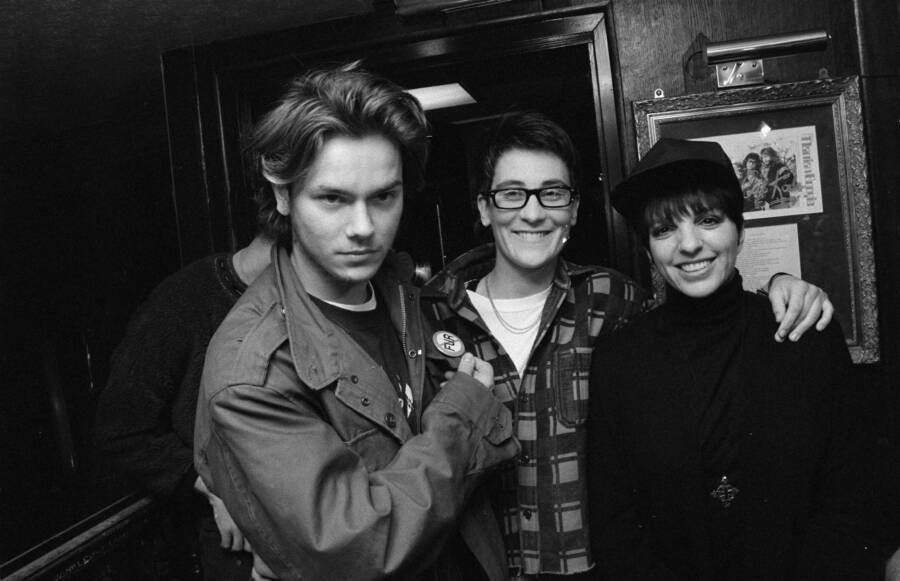 Sadly, River Phoenix’s death in 1993 wasn’t a complete surprise. By then, the actor was already a common sight at drug-fueled parties.

At the time, his parents and four siblings were entirely dependent on River’s success. Meanwhile, he also wanted to ensure that his younger siblings were able to get the education that he was never able to receive. Little did the world know how much pressure he was putting on himself.

On top of all that, Phoenix was likely still grappling with his traumatic memories of being involved with a cult at an early age. While he rarely spoke about the Children of God in public, his mother once quoted him as saying, “They’re disgusting. They’re ruining people’s lives.”

Whether rooted in trauma, stress, or the deadly freedom of celebrity, Phoenix eventually turned to cocaine and heroin. And sadly, these two drugs would spell his end at The Viper Room. 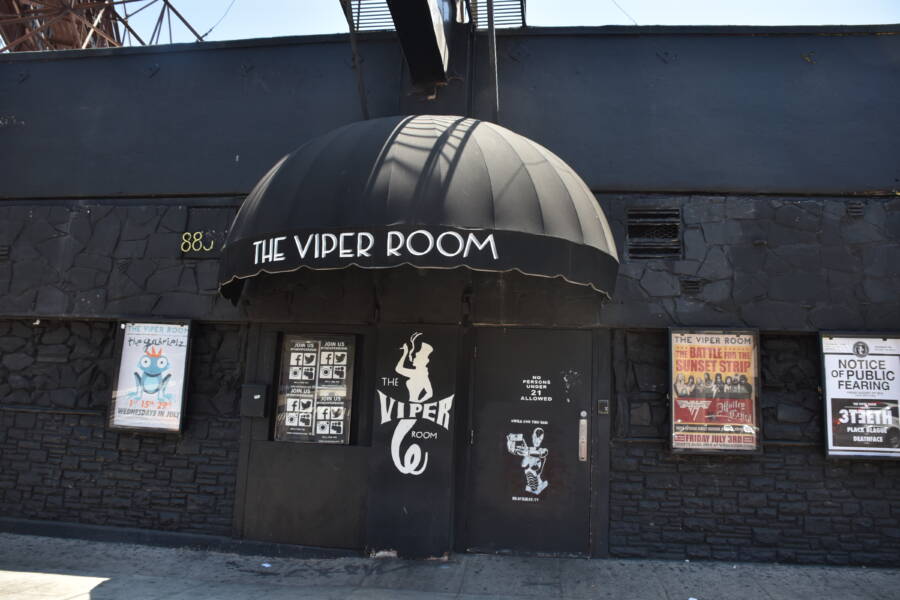 In the weeks leading up to his death, River Phoenix had been filming the movie Dark Blood in Utah and New Mexico. But since he wasn’t needed for a certain night shoot, director George Sluizer allowed him to return to California. “I’m going back to the bad, bad town,” Phoenix said.

He returned to Los Angeles on October 26, 1993. And according to his friend Bob Forrest, Phoenix then went on a massive drug binge with John Frusciante, the guitarist from the Red Hot Chili Peppers.

“[River] stayed with John for the next few days, and probably didn’t get a minute of sleep,” Forrest wrote in his book Running with Monsters. “The drug routine stayed pretty consistent for all of us. First, smoke crack or shoot coke directly into a vein for that ninety-second, electric brain-bell jangle.”

“Then shoot heroin to get a grip and come down enough to be able to carry on a conversation for a few minutes before you start the cycle again.” 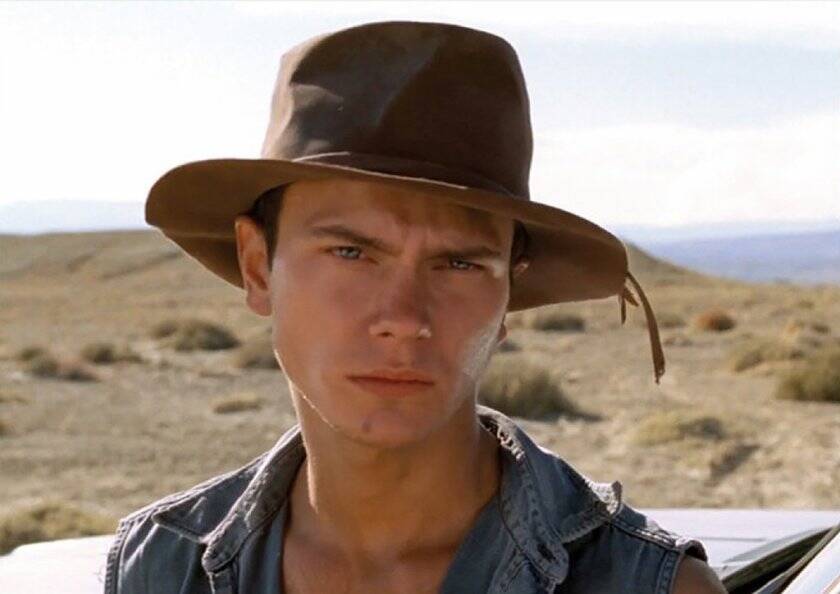 Scala Productions/Sluizer FilmsRiver Phoenix in his last film, Dark Blood, which was released nearly 20 years after his death.

On the night of October 30, 1993, Phoenix and his girlfriend Samantha Mathis arrived at The Viper Room. Two of Phoenix’s siblings, Joaquin and Rain, were also in attendance. While Joaquin and Rain didn’t notice anything unusual, Mathis had a feeling that something was off with River.

“I knew something was wrong that night, something I didn’t understand,” she said. “I didn’t see anyone doing drugs but he was high in a way that made me feel uncomfortable.” Just a couple of hours later, he would be dead.

At one point in the night, Mathis took a trip to the bathroom. When she came out, she witnessed a bouncer shoving her boyfriend and another man out the door. At first, she thought the two men were fighting, but then she saw Phoenix drop to the ground — and go into convulsions.

Horrified, she ran back into the club to get Phoenix’s siblings. Joaquin then made a heart-wrenching 911 call, which was later leaked to the press. “He’s having seizures!” he shouted. “Get over here please, please, ’cause he’s dying, please.” Meanwhile, Rain tried to stop her brother from thrashing around.

Sadly, River “flatlined” before help arrived. He was officially pronounced dead at 1:51 a.m. An autopsy report later revealed that the promising young actor had died from an overdose of cocaine and heroin. There were also some traces of Valium, marijuana, and ephedrine found in his system.

The Legacy Of River Phoenix’s Death 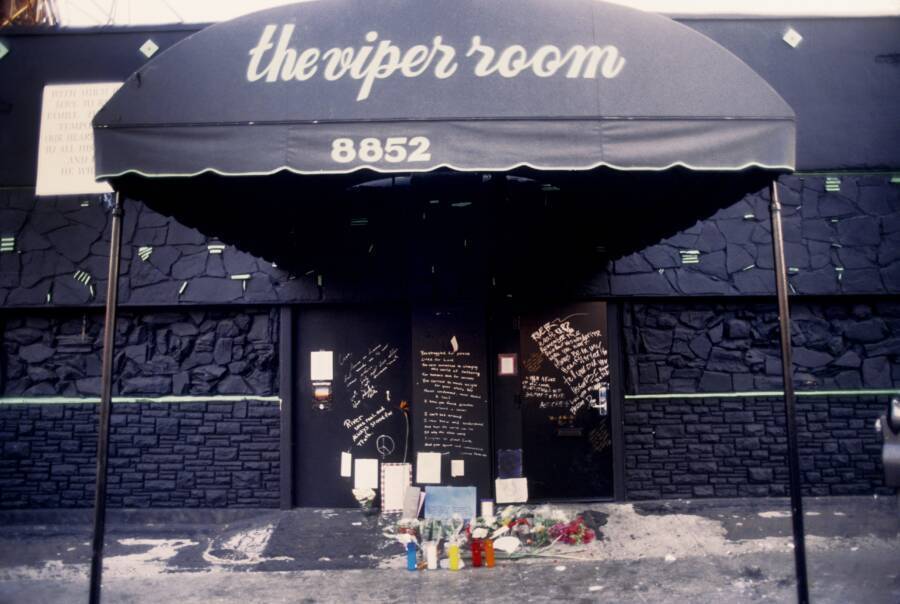 Michael Ochs Archives/Getty ImagesTributes at The Viper Room honoring River Phoenix the day after his death in 1993.

After River Phoenix’s death, The Viper Room temporarily closed in his honor. Heartbroken fans soon flocked to the venue to leave flowers and handwritten tributes to the fallen actor. Though the nightclub eventually reopened, many regulars said that it was never the same again.

River Phoenix’s death left a notable void in Hollywood. From his fans across the globe to his famous friends, everyone felt a visceral loss.

Even younger talents like Leonardo DiCaprio were shaken by the news. In a strange turn of events, DiCaprio actually saw Phoenix in Hollywood on the same night that he died — just hours before he left this Earth.

“I wanted to reach out and say hello because he was this great mystery and we’d never met,” said DiCaprio. “Then I got stuck in a lane of traffic and slid right past him.” But while he wasn’t able to talk to Phoenix, he did get a look at his face: “He was beyond pale — he looked white.” 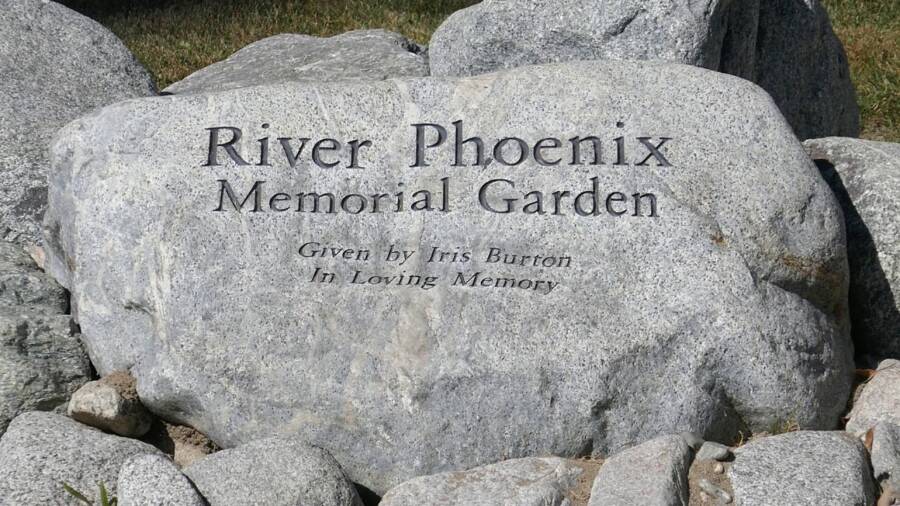 YouTubeThis memorial in Arcadia, California was dedicated by Iris Burton — the talent agent who discovered Phoenix.

But of course, those most affected by the death of River Phoenix were his devastated family members. His brother Joaquin recalled having a difficult time grieving, as the paparazzi often harassed the bereaved family.

“Certainly, for me, it felt like it impeded the mourning process, right?” Joaquin said, adding that he soon began to think of his late brother as the ultimate inspiration for his acting. “I feel like in virtually every movie that I made, there was a connection to River in some way. And I think that we’ve all felt his presence and guidance in our lives in numerous ways.”

For those who’ve followed Joaquin Phoenix’s career, it’s no secret how closely he holds his older brother’s memory. After winning the Oscar for Best Actor at the 92nd Academy Awards in 2020, the Joker star offered a tribute to his late sibling during a touching speech:

“When he was 17, my brother wrote this lyric. He said: ‘Run to the rescue with love and peace will follow.’”

Though nearly three decades have passed since River Phoenix’s death, it’s clear that his memory lives on — especially in the hearts of his loved ones.

After learning about River Phoenix’s death, read about the tragic demise of Amy Winehouse. Then, take a look at the mystery of Natalie Wood’s death.