The 35 fishermen followed their noses to a whale carcass in the Gulf of Aden and discovered to their delight that it contained the rare substance ambergris.

YouTube“It was an unimaginable price. We are all poor. We never expected this thing would give us such a huge amount,” one of the fishermen said after nabbing the valuable chunk of ambergris.

Some people dream of discovering gold. Others hope to find whale vomit. In Yemen, a 280-pound chunk of whale vomit recovered from a sperm whale carcass has netted 35 fishermen a jaw-dropping $1.5 million dollars.

“It’s like an unbelievable dream,” said one of the fishermen, whose share of the profits helped lift him and the others out of poverty.

He and his crew came across the carcass of a sperm whale while fishing in the Gulf of Aden. They followed a tip from another fisherman about a whale floating nearby.

“As soon as we got close, there was this strong smell,” one of the men told the BBC. “And we had a feeling that this whale had something.”

Sure enough, the carcass of the whale contained hundreds of pounds of ambergris — a pungent, waxy substance found in the intestines of sperm whales.

“We decided to hook the whale in, take it to shore and cut into it to see what was inside its belly,” explained one of the men. “And yes, it was ambergris. The smell wasn’t very nice but lots of money.”

The fisherman sold their find to a buyer in the United Arab Emirates for a whopping $1.5 million.

“I felt so happy,” said one of the fishermen. Another said he thanked God for their luck.

Ambergris is a surprisingly valuable substance that sells for roughly $20 a gram (gold sells for $30). The perfume industry uses ambergris to make fragrances last longer. However, because ambergris is so rare, perfume makers usually rely on synthetic replicas. 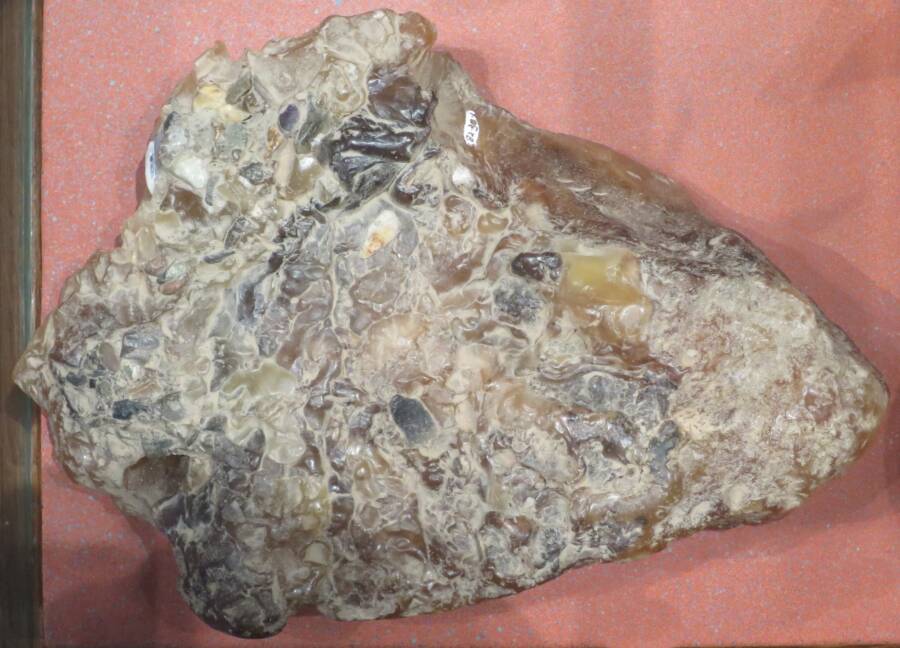 Wikimedia CommonsA chunk of ambergris on display in an Alaskan museum.

So, what is ambergris — the so-called “floating gold” found by the Yemeni fishermen?

This rare and valuable substance comes from a quirk of nature. Sperm whales enjoy dining on squids. But they can’t digest squids’ hard beaks. The undigestable beaks accumulate in the whale’s gut and either pass as vomit or as feces. The whale’s digestive tract forms ambergris to help protect its insides before and during passing of the dangerous objects.

Once the ambergris is passed by the whale — although sometimes it gets trapped in their intestines — the substance emits a strong smell. This smell eventually becomes more musky.

Sounds gross, but perfumers see beauty in ambergris. “It’s beyond comprehension how beautiful it is,” said Mandy Aftel, a perfumer in Berkeley, California. “It’s transformative. There’s a shimmering quality to it. It reflects light with its smell. It’s like an olfactory gemstone.”

And the fisherman would likely agree. The whale carcass they pulled ashore — and its ambergris — has completely transformed their lives. 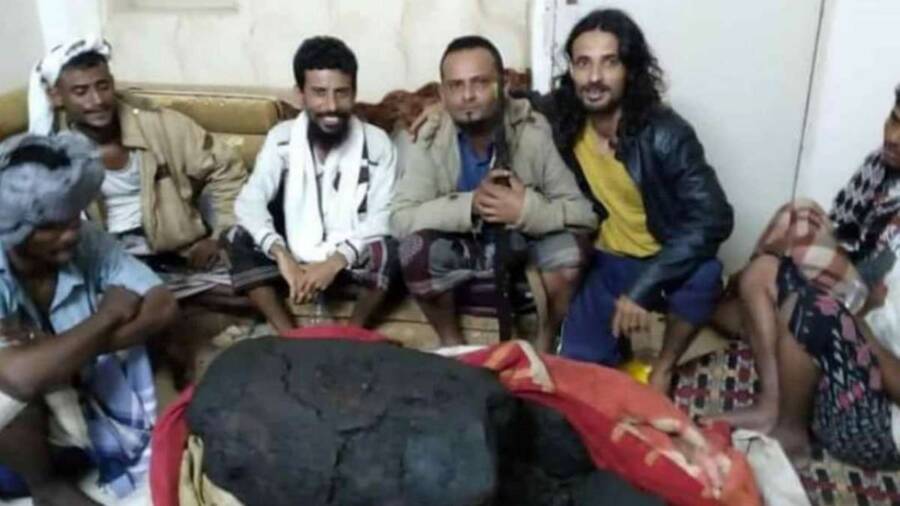 TwitterSome of the Yemeni fishermen with their incredible find.

“It was an unimaginable price,” one of the men said. “We are all poor. We never expected this thing would give us such a huge amount.”

After receiving the $1.5 million payout, the fishermen split the profits equally. They used the money to buy cars, houses, and boats — and made new plans to get married. They even donated some of the money to poor families in their village.

Incredibly, they aren’t the first to profit from ambergris in recent years. In 2016, three fishermen in Oman found ambergris which sold for $3 million. Four years later, a fisherman in Thailand found a chunk of ambergris that sold for $3.3 million. Even beachcombers have come across ambergris — in 2012, a boy in England found a piece of ambergris on the shore worth $40,000.

Anyone tempted to seek out ambergris as a way to make millions should take heed, however. Not only are sperm whales protected animals, but ambergris itself is illegal in some places. In the United States, for example, it’s forbidden to use ambergris in perfumes.

Plus, just 5 percent of whale carcasses contain ambergris. It takes a lot of luck to find a whale that died just after eating some hard-beaked squids.

So, digging for gold might make a better get-rich scheme than hoping to find whale vomit.

After reading about the whale vomit that made fisherman in Yemen rich, discover the strange story of Oregon’s exploding whale from 1970. Or, learn all about the bizarre origins of ambergris.